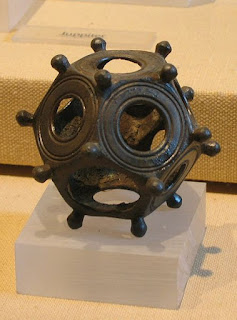 A news story came across my Google Reader a couple of days ago: "Roman jewelry found in ancient Japan tomb." Not exactly startling stuff, not even if we take the time to consider the purported Japanese tomb of Jesus Christ. Trade networks in the ancient world were perfectly capable of transporting a few glass beads from the Roman Empire to Japan. I filed it away and thought of it as an interesting story to kick off this blog, nothing more.

Then I happened upon a Wikipedia article (I'm guessing a lot of posts on this blog will start off this way) on odd Roman artifacts dubbed the "Roman dodecahedra." They're sculptures of either bronze or stone, shaped like the twelve-sided Platonic solid familiar to gamers and Carl Sagan fans everywhere. Following on the heels of the well-publicized (again, at least among gamers) discovery of the twenty-sided Roman die a few years back, the mystery of the Roman dodecahedron is much more profound. Found only in Gallo-Roman territories, their purpose is ultimately unknown, despite some interesting agricultural theories. Are these strictly out-of-place artifacts? No, but with their purpose unknown, any number of possible origins, including occult ones, could be contrived for them. Remember, the dodecahedron was the symbol of the quintessence and the Aether and in more modern times was theorized to be the actual shape of the universe. A mystery wrapped inside another mystery? That's the way to kick off a blog, my friends.
Posted by Michael Grasso at 1:23 PM