Caper Movies That You Should See! #1


"I'd love to see a piece from John on films that have been lost to the ages."

This was a comment from Chris Tatro a couple of weeks back. And I'm nothing if not obliging (albeit slow in the fulfillment of these obligations...)


I shall, however, begin my command performance by closing the net in a little tighter, and focus only on caper flicks. Why? Well, because they may just be my favorite genre of film. But more importantly, capers are an evergreen genre; no matter what else is the latest trend at the box office-- be it vampires or reboots or comic books-- every year brings at least a couple of new capers to the screen... some good, some bad, some of which do 'boffo box' (oh, please forgive me... I hated myself the second I wrote it), and some which even go on to become classics.

(Oh, and if you'll pardon me a moment of shameless self-promotion: My long-time love of the genre and its tropes inspired me to create a caper themed role playing party game. So yes, it is officially A Geek Thing® for me.)

What I want to focus on in this column are those gems which I feel have fallen through the cracks in the zeitgeist… the movies that I, as a professed aficionado (read as: geek) of the genre, really enjoy and would like to share. I'm not going to write about true bona fide cinema classics like Rififi and The Sting. I'm also not going to bother writing about films like the originals and remakes and sequels of the various Ocean's movies, The Italian Jobs, or The Thomas Crown Affairs.  While these are all fantastic movies, they're not exactly lost to the ages. (Although, if you haven't seen some of those aforementioned films, do yourself a favor. Good stuff.)


So, here is what will be the first in a (hopefully) periodic series of posts entitled: 'Caper Movies That You Should See.' 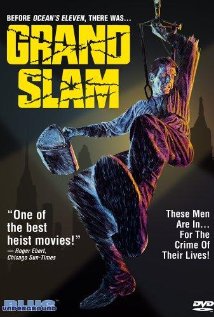 Edward G. Robinson for all intents and purposes reprises his role (if not the wardrobe) from 1960's Seven Thieves (another caper movie you should see, and perhaps one I will cover in a future post), and masterminds a $10 million diamond heist in Rio de Janeiro during Carnival. To pull off the heist, he assembles an international crew of professionals who moonlight as thieves-- a safecracker who is butler to an English lord; an Italian electrical engineer and toy maker; a German paratrooper; a French dilettante and playboy.


How does a mastermind-in-need gather such an eclectic mix? He goes to a fixer who possesses the greatest criminal database that I have ever seen depicted in any caper film, bar none:

This is actually one of the things I love most about this movie-- how analog it is, both in its storytelling and in its filmmaking. For example: the practical effects. Granted, in the days before computer special effects, all effects were practical, but Grand Slam has one sequence that has always stuck with me: the grid of lasers that protects the vault is created by using fluorescent tubing. Given how often we see this laser beam gag done in modern caper movies-- and thinking about how all of these ersatz lasers are simply added in post around the contortions of the star's acrobatic body double-- I find it kind of charming to see the actors have to navigate around a real-world set piece.


Granted, not all of this movie's effects are quite so charming. This movie has some of the worst chroma keying I have ever seen... Edward G. Robinson was apparently based in Rome and didn't make the trip abroad, so they had to fake him into exterior shots of Rio and New York. Here's a case where I wish the filmmakers had again gone analog and used traditional rotoscoping or rear projection rather than using what was, at the time, a relatively new fangled technology. These shots are especially cringeworthy since they appear in the very first scenes of the movie. It is an early misstep that, when I first watched the film, I feared would set the tone of things to come. I'm glad I was proven wrong.

Another thing that's not so charming, but in a good way: a young Klaus Kinski as the aforementioned paratrooper who serves as the crew's wheelman and muscle. Its kind of nice to see Klaus was always a scenery-chewing wild man, even before he hooked up with Werner Herzog. He literally growls like a wild animal when he's strangling a dude. To quote-mash the Master Thespian and Ferris Bueller: Acting! Never had a single lesson! Brilliant!

And, without spoiling anything, another thing I love about this movie is the ending. Oh, that ending. Actually, a lot of the caper movies of this era have great endings. I daresay test audiences would never allow a studio to end films that way today. Of course, I assume these endings probably often had more to do with the Production Code than with any particular sentiments or artistic statements on the part of the filmmakers... but they do make for deliciously ironic and often humorous twists.


Another cool thing from a historical perspective: Rio's favelas-- the infamous slums which are so masterfully depicted in City of God and City of Men-- were just in their infancy when Grand Slam was shot, so it is interesting to see them before they've crawled their way up every mountainside and grown several stories tall.


And lastly, the swinging bossa nova score is by Ennio Morricone, so that's a good thing. I find the chorus of kids singing "Yeah yeah yeah, yeah yeah yeah yeah yeah," over and over during the Herb Alpert inspired theme song, however, to be not as good of a thing.

Despite my snark, I hope that this is a caper movie that you will see. You can buy it directly from the distributor (you can also suffer through the original theatrical trailer on that page) or rent it from Netflix.