With Prussia in the hands of the Eastern Bloc, Roosevelt's plan split the western portion of Germany into four sovereign nations, each with its own ancient national identity. Germany as a nation, of course, was only as old as the previous century. Before that, the German-speaking lands were a hodgepodge of nations, principalities, city-states, and even ecclesiastical sees. Roosevelt's plan struck at the heart of the "dangerous idea" of Germany, in an unconscious attempt to bring it back to the era of the Holy Roman Empire and the period between Augsburg and Westphalia. 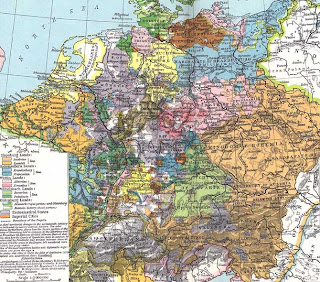 Indeed, in this timeline, two factors contributed to the rebirth of a profoundly fragmented Germany. Four of those six states created at Yalta (Soviet-controlled Prussia and neutral Austria excepted) began to devolve power due to denazification efforts, stripping most of the four new Western German nations of their experienced politicians and business leaders. Political power slipped down the ladder a few rungs, from the newly-created nations' parliaments to their individual states. Constitutions failed, and individual cities and regions began declaring independence based on borders going back 400 years. By the early 1950s, Hanover, Hesse, Saxony and Bavaria now existed only as loose confederations of dozens of smaller cities and states. By 1955, the designations set up by Roosevelt at Yalta had disappeared altogether, leaving Europe a continent of over 100 different nation-states.

The other contributing factor was, of course, the Cold War. In a curious echo of the Reformation-era policy of cuius regio, eius religio, the individual city-states making up Western Germany now each had parliaments and councils, and free elections (guaranteed by the Roosevelt Plan, even with the devolution of power) which would determine which of the 20th century's great "religions" they would follow: capitalism or Communism. There were now dozens of new nation-states' ballot boxes to stuff. The CIA was busy, as was the Soviet Union, in influencing these tiny nations to go their way.

The sheer amount of manpower needed for playing the Great Game across the checkerboard of a fragmented Germany meant that the hot spots of the Cold War in this timeline were much cooler. Korea was a mere skirmish; Cuba, Indochina, Guatemala, and other Third World flashpoints either fizzled or remained in a state of espionage-enabled stasis or, at worst, terrorism. Open war seemed a waste of resources when with a few well-placed political bribes or assassinated officials, the entire balance of power in Europe could change in a heartbeat.

Domestically in the United States, nuclear paranoia still reigned, but it was blunted by the belief that the war would remain a cold one, due to the pure number of German states still in play politically in the late 1950s. The Cold War was being fought with ballots, not bullets, and that therefore blunted McCarthyism and weakened Eisenhower's re-election chances in 1956. Adlai Stevenson ran on the policy of "international devolution," believing the fragmenting of modern nation-states, especially throughout the Third World, could blunt and deflect the rising tensions between the two global powers.

By the time 1963 rolls around under President Stevenson in his second term, that indeed has happened. As the European states complete the release of their colonies to independence and the Stevenson Plan arranges for decentralized confederations of ethnic groups to take their place, it certainly defuses the Cold War ambitions of the U.S. and U.S.S.R. But instead, open warfare and ethnic cleansing having nothing to do with the Cold War break out in Africa, Asia, and the Middle East. Warlords and strongmen with no allegiance to either great power fight wars of attrition based on religion or tribal identity. What worked in Western Germany is not reproducible in other parts of the world, and Stevenson loses in a landslide in 1964 to Barry Goldwater, who promises a hard line and a "shepherding of the German states loyal to democracy behind an Iron Curtain."

Note: There's a "director's commentary" in the comments from me on where I started with this AH and where it ended up; quite far from where I'd expected!
Posted by Michael Grasso at 8:28 AM