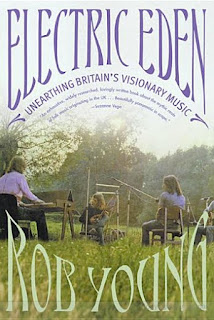 1. At the turn of the last century, German ethnomusicologists had taken to calling England "das Land ohne Musik": "the land without music." Germany had gone through its own folk resurgence corresponding with the foundation of the German Empire; even the Americans by the 1900s were sending intrepid ethnomusicologists into the Appalachians and collectors of Scottish ballads into the Highlands. Through the rest of Europe, classical composers were fusing folk traditions with accepted centuries-old forms of orchestral music. The English lagged far behind. But in literature and art, there was a post-decadent focus on a primitive English countryside, divorced from time and place. Paradises (specifically socialist pastoral paradises) that lay in the far future (William Morris's News From Nowhere and H.G. Wells's Eloi of The Time Machine) were just two. And these socialist speculative-pastoral writers eventually found their musical counterparts who were just coming into their own at the Royal College of Music at a sort of free port of progressive artists at the turn of the century: the Society for the Protection of Ancient Buildings. It was there that two young university composers found themselves influenced by this forward-looking pastoralia: Gustav Holst and Vaughan Williams.

2. The occult strain in early 20th-century English folk music can be traced to the efforts of Peter Warlock, (a.k.a. Huanebango Z. Palimpsest, Apparatus Criticus, Rab Noolas, or his birthname Philip Heseltine) who was deeply steeped in Golden Dawn mysticism, Tarot, astrology, Spiritualism, and Theosophy. Warlock's eccentricity relegated him to a hanger-on, but the influence of the nascent occult sciences combined with the studies of the ancient folktales and songs being rediscovered by musicologists like Cecil Sharp. The performances that the new generation of English folk composers planned occurred in ancient churches, green swards, village greens: all the sorts of buildings and places that the Society had sought to save. It was this generation that returned morris dancing and sword dancing to England's green and pleasant land.

3. Moving into the post-World War II era and the folk-rock fusion which Electric Eden is really about, we come across the 1950s, a time when an American folk revival in New York City was making parallel waves in London. The London postwar folk scene was one devoted entirely to English song-making. American songs, and even Irish and Scottish tunes, while not looked down upon, were reserved to artists of the proper origin to perform. With the paucity of English source material, folk singers of the 50s turned to an unlikely champion: Auntie Beeb. Radio and film documentaries, of a pseudo-poetic/musical style pioneered in the years leading up to the war, enabled these folkies to tell the stories of ordinary men: miners, train workers, and others. This new industrial modern folk contrasted with further "back to the past" movements like the tendency toward medieval modes like plainsong. 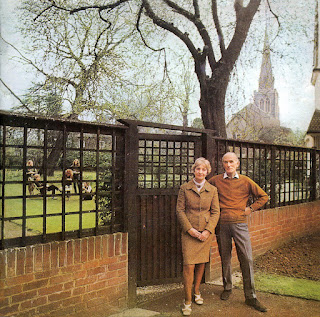 4. Young flings us into the late 60s with a series of chapters focusing on a murderers' row of folk-rock legends, each associated with a classical element: Pentangle (Air), Fairport Convention (Earth), Nick Drake ("Orpheus in the Undergrowth"), Sandy Denny/Fotheringay (Water), and The Incredible String Band (Fire). A chart tracing the connections between these and the dozens of other bands of this era would resemble an especially recursive fractal. But among these bands, among the lineup changes and rivalries and changes in style, there are the mysteries, the seemingly-ephemeral figures all too short for this world such as Drake and Denny and the tragedies these bands seemed to attract in near-mythic proportions. Young spends quite a bit of time analyzing the aftermath of the album cover photo of Fairport Convention's Unhalfbricking:


Unhalfbricking's sleeve is unbearably poignant... the reverse is a suburban Last Supper. The group's five members are arranged awkwardly around Denny's family's dining table, holding half-chewed slices of white toast. Within a month or so of this photo being taken, (Fairport drummer) Martin Lamble would be dead, killed in an 'M1 breakdown' more horrific than anything they could have imagined. (Young 249)

On the front of the album cover, where we see Sandy Denny's parents standing on the outside of their own garden with the band inside framed by their fence:


The omens of Sandy's fate are already here, loaded into this single photograph. Sandy stands behind Martin Lamble, who would be dead within a few weeks. Nine years later, almost to the month, on 4 April 1978, Sandy was discovered in a heap at the bottom of the stairs at her friend['s]... flat." (Young 326)

5. The latter third of Electric Eden traces the aftermath of the explosion and saturation of folk-rock outfits in the mid-70s and the subsequent decline of most; the laughable late works of Steeleye Span, the survivors who didn't quite leave the golden age with, say, wits or marriages intact, and of course, all the real casualties, the men and women who didn't survive to see the end of the movement. In Young's recommended listening in the appendix, two of the artists who appear more frequently than most any others from the 1980s onward are Kate Bush and Boards of Canada. Interesting heirs to that time of magic and music and liminally past-future idylls.
Posted by Michael Grasso at 9:43 PM