Five things I learned from reading Michel Pastoureau's The Bear: History of a Fallen King 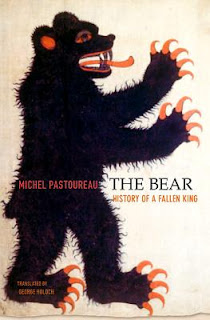 1. Words for "bear" in the Indo-European languages exhibit some surprising correspondences (at least according to Pastoureau). There are two prevailing theories for the origin of the word "bear" in Germanic languages, either coming from a root meaning "hard, strong" from which we get "baron," or, more interestingly, from the same series of roots which produce the color "brown" and the word "brilliant." The theory Pastoureau puts forth is that the gleaming, glossy fur of the bear offered a double wordplay on this root which made the bar- root a natural fit for the animal. This is further boosted by the nature of the Indo-European root arc- which means "gleaming" and was handed down to Celtic, Greek, and Romance languages. This root is also believed to be related to mythical entities and locations such as Artemis (the moon goddess of the Greeks), Arcas, Arcadia, and... King Arthur.

2. The tale of Arcas is a typical story of Zeus coming upon a maiden in another form and fathering a child upon her1, but it also provides evidence of an early myth-image of the bear as able to produce children with human females, which became much more widespread in the Middle Ages. Sexual congress between bear and woman in medieval folklore often resulted in offspring who were not monsters, but children who could be baptized and raised as any other child. Pastoureau references the medieval German exemplum of a young woman snatched from her family by a bear and repeatedly impregnated who, once rescued, raised the bear's children alongside her own, with the only proviso being "their abundant hairiness" (Pastoureau 77). Where did this myth idea come from? Observations of the bear not only walking as a man bipedally (see below) but also the idea that the bear supposedly mated in the manner of man, face-to-face, influenced the medieval mind to see the bear as quasi-human. This unique-among-animals form of mating gave the bear a reputation for lustfulness and lewdness that dogged it throughout the Middle Ages.

3. Getting back to metamorphoses, the bear was a very popular animal in medieval myth for men to turn into. Surely, the ease of real-life men taking a bear-skin and pretending to be a bear was frequently noted (indeed, there are many medieval injunctions against Christians "playing the bear"). But between the bear-blooded offspring of inter-species matings, the magical ability of quasi-lycanthropic bear-men throughout Germanic myth, and the Norse "berserker," the line between man and bear was sometimes quite blurry. These warriors seeking to tap into the savagery of the bear are accessing an ancient lineage of bear-worship. It is believed that warrior-king Arthur has, if not ursine aspects, then was wholly a bear-myth figure himself. Pastoureau cites the etymology above as well the tale of his death (on All Saints' Day with the coming of winter) and eventual return, echoing the bear's "death" in hibernation and waking upon the spring. Candlemas, a Christian holiday with definitive pagan origins (as one of the eight corners of the year), is found frequently in Arthurian legend, including in many versions as the day the young Arthur pulls the sword from the stone and essentially claims his kingly birthright.

4. But the bear was not a king for long in the Middle Ages. All the propaganda of the medieval bestiaries, of popular myth, of even the Church Fathers (Augustine famously declared that ursus est diabolus) took its toll on the bear's reputation. Repeated hunts and culls of thousands of bears by medieval kings and knights took their toll on the actual population of European bears. Pastoureau posits that the medieval mind still needed a king-beast, and for that purpose, the bear was gradually supplanted by the lion. Lions were not unknown in antiquity in Europe, but by the Middle Ages they were rare indeed. What made the lion a better king? As the bear could be called sexually incontinent, a mockery or ape of humanity, a tumbling, bumbling fool (see below) using both observation and Biblical/religious precept, the lion exhibited supposed Christlike properties:


The lion wiping away his tracks with his tail to fool hunters was Jesus concealing his divinity by being born of Mary: he became a man in secret the better to deceive the devil. The lion who spares a defeated enemy was the Lord who, in his mercy, forgives the repentant sinner. The lion who sleeps with his eyes open is Christ in his tomb: his human form sleeps, but his divine nature keeps watch. The lion who breathes life into his stillborn cubs on the third day is the very image of the Resurrection.

5. The bear was hunted basically to extinction, it was termed demon, rapist, and mockery of man. Its final indignity, according to Pastoureau, was to become an object of mockery itself. It went from being a warning of lust to one of sloth and gluttony. The mythic bear became the dumb, clumsy Brun of the Roman de Renart, who is treated as a fool and foil, whose final indignity was to be cut up and salted by a farmer who Brun was only trying to help. In real life, the bear was often tamed to be a show beast by jongleurs at best, and lashed to a post and savaged by dogs at worst. By the time Pastoureau is done demonstrating the descent of the bear from object of prehistoric veneration to Teddy Bear, you start to feel bad for them.

1 Disguised as Artemis, Zeus impregnates the nymph Callisto, producing the child Arcas, who would later be turned into a cub (and placed in the sky as Ursa Minor). So while Zeus isn't turning into a bear here, there is an eventual metamorphosis in his offspring, influenced by the form he took (if we accept Artemis as a bear-goddess).
Posted by Michael Grasso at 7:49 AM