The Fourth of July: Eye and Pyramid

It's nearly July 4th. So? So let's get Weird with America. Or, rather, let's dispel Weirdness with good honest history. Perish the thought! 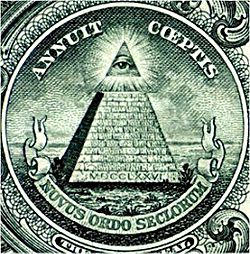 What more has to be said about the reverse of the Great Seal of the United States? The all-seeing Eye of Providence stares back at us from every dollar bill. We all know it's a Masonic symbol, right? Evidence of a sinister conspiracy at the foundation of the United States? Well, sort of but not really.

Pierre Eugene du Simitiere was a Swiss Philadelphian artist who was enlisted by the Second Continental Congress through his friend Benjamin Franklin to help the Congress with the design of a Seal for use in international communications. While Franklin and Thomas Jefferson may have been polymaths, they weren't necessarily well-versed in heraldry and emblem design.

The Pyramid and Eye were at the crown of Pierre Eugene du Simitiere's first draft of the Great Seal, which also included two allegorical figures of Liberty and the American Soldier as well as a six-sectioned shield representing the six most prominent nationalities of the fledgling nation. Franklin, Jefferson, and John Adams also had a crack at a Seal design during those first meetings; Franklin and Jefferson staying on well-trod ground with Exodus references, and Adams, ever the lovable iconoclast, opting for an allegory of Hercules choosing the road less-traveled. But the Congress put the Pyramid and Eye away for the next six years. Committees came and committees went and eventually the new designers opted for the eagle on the obverse and the Pyramid on the reverse.

So where do the Pyramid and Eye come from? Renaissance allegorical emblems of course! The Eye of Providence usually appeared in the clouds and sometimes even in the palm of the Hand of God. The Pyramid is a little tougher to chart, although the Eye often appeared in an ephemeral triangle meant to echo the Trinity. It was William Barton, of the third Great Seal committee, who turned du Simitiere's triangle into a physical Pyramid with thirteen steps.

But here's the truth about Masonic conspiracies: the Great Seal of the United States more or less came first. While the Eye of Providence was used by Masons prior to the development of the Great Seal, the Eye/Pyramid combination was not. American Masons, probably thinking to themselves, "Wow, how did we not come up with something that creepy and weird ourselves?" swiped it in 1797 for one of their publications.
Posted by Michael Grasso at 9:38 AM