So this morning I was going for my usual at Starbucks and I walked back to my car. Beyond the concrete parking stop, I could swear I saw a discarded playing card. I got closer, and that's indeed what it was. 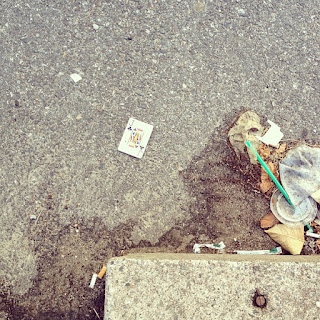 I mean, it's an odd thing to just see hanging out as common parking lot litter, right? I wasn't about to assign any great meaning to it, but as it's essentially a one-card cartomantic spread, I thought I'd read up on the meaning of the Jack of Clubs.

First of all, if you are a Tarot aficionado, you will already know that there are Knights and there are Pages among the royals of the Minor Arcana. The transition to playing card decks having one "junior" member of the royal "family" happened with the standardization of the playing card deck in France in the 16th century. Before that, Europeans played with a hodgepodge of playing card decks, based on Italian, German, or French designs. The French design won out in England thanks to massive exports to England in the mid-16th century, all from the playing card center of Rouen, which assured its primacy in the English-speaking world.

So we can't really tell whether that card in the parking lot was Page or a Knight of Wands. And there's no real united interpretation on French-style playing card cartomancy out there, either. Leaving aside that fact, there's also the Jack of Clubs's inherent... inconspicuousness.

After all, unlike the ruddy Jacks of Diamonds and Hearts, no one's ever written a song about the Jack of Clubs. It's not a one-eyed Jack, either. It's just sort of... there. And Clubs as a suit, well, again, nothing special about it. Unlike Spades and Hearts, there are no trump games invented around it, and in most games it's the lowest ranked suit. So what's interesting about the Jack of Clubs?

Let's go back to France in the 16th century. When the royal cards in the French design were invented, they were not based on any particular exemplars but popular, "urban" myth soon assigned them any number of corresponding figures from history or legend. The printers then picked up on these popular assignments of real-life figures and started printing them accordingly, sometimes on the cards themselves. The Jacks represent famous knights, of course: La Hire, Ogier, and Hector for the Jacks of Hearts, Spades and Diamonds respectively. The Jack of Clubs was said to be Lancelot.

Listen, I know Lancelot was supposed to be one of Arthur's finest knights. But let's be honest; he was also one of those responsible for the fall of Camelot through his adultery with Guinevere. The other three Jacks had more or less sterling and positive representations in history and throughout legend, but Lancelot's reputation is entirely more ambiguous. Another of the possible correspondences for the Jack of Clubs was the historical Judah Maccabee, who'd also have been called Judas by Europeans of the period and you can imagine the possible onomastic or ethnohistorical conflation that might have gone on in card-players' minds at the time on that account.

So then, is the Jack of Clubs a traitor? Does he get a bum rap? Is he the lowest of the low? All I know is I saw him lying in a gutter this morning.
Posted by Michael Grasso at 8:47 AM