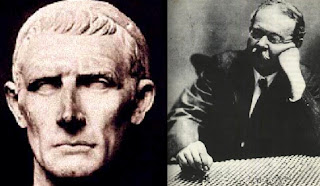 "I am quite aware that the spirit of indifference which in these days makes men in general refuse to believe that the gods warn us through portents, also prevents any portents whatever from being either made public or recorded in the annals. But as I narrate the events of ancient times I find myself possessed by the ancient spirit, and a religious feeling constrains me to regard the matters which those wise and thoughtful men considered deserving of their attention as worthy of a place in my pages."
- Livy, Ab Urbe Condita XLIII.13

"I believe nothing. I have shut myself away from the rocks and wisdoms of ages, and from the so-called great teachers of all time, and perhaps because of that isolation I am given to bizarre hospitalities. I shut the front door upon Christ and Einstein, and at the back door hold out a welcoming hand to little frogs and periwinkles. I believe nothing of my own that I have ever written. I cannot accept that the products of minds are subject-matter for beliefs."
- Charles Fort, Lo, 1.3

One thing that I think is important to realize when considering Charles Fort's vaunted place in present-day "paranormal studies" is that he is far from the first person to make detailed lists of supernatural events in meteorology and zoology, or of mystical happenings with no rational explanation. Indeed, in Republican Rome there was a huge state infrastructure in place to deal with these events - a religious-political complex, if you will - that served the SPQR in handling reports of these disturbing happenings.

Let's first state that no one in Republican Rome really wanted to have to interpret the meanings of these so-called prodigia. In fact, the whole group of "unasked-for" Weird events had its own classification, "auspicia oblativa," or "offered" or "voluntary auspices." An oblation is usually an offering from man to god; here, the rains of blood or stones or strange voices at mountaintops go the other way, from god to man. Interesting indeed to consider the Roman religious view of Earth as a large altar or even a palimpsest upon which the gods could send messages to humanity.

The augurs of Rome knew that any unexplained phenomena not found in their ancient guidebooks would likely be uninterpretable by normal means. The more ancient art of haruspicy (reading entrails) used by the Etruscans was later supplemented with and supplanted by the auspicy, using signs within the sky such as bird flights and lightning, to read the will of the gods. A great body of work had been built up over centuries to interpret these signs. But with rains of blood, or of stones, or glowing weapons floating in the sky, there were no guidelines, no understanding... just fear and profound superstition.

The safest thing to do when confronted by a prodigium was schedule massive sacrifices to cover all bases to ensure the Republic did not fall at the hands of the gods. Unlike reading the flights of birds in the air, for which there was an ancient and trainable science, the auspicia oblativa had no standard interpretations so other, contextual information had to be produced. Knowledge of the conditions in close proximity to the prodigium -- cultural, geographical, natural and theological, as well as the identities and reputations of the witnesses -- all had to be taken into consideration. Livy's History of Rome is full of stories of soldiers and colonists walking the borders of the Republic and finding events like these, reporting them back to Rome's priests and augurs, and being interrogated later for the purposes of the records.

Expitiation was the name for the process that the augurs would commence, in Rome, to ritualistically cleanse the body politic. It contrasts with the more familiar propitiation, which involved asking for blessings from a god or gods. In the case of expitiation, the wrong or sin has already been committed.  Expitiation erred on the side of sacrificing too much rather than the possibility the gods might be insulted. Interpreting a prodigium and concocting the appropriate expitiation was a formula with two variables, both unknowns. The books of the augurs and haruspices would only contain a formula for expitiation after such a new prodigium were discovered; the first group of augurs to discover a particular prodigium were on their own.

Prodigia existed in a continuum of various other unnatural events, all slightly different but all with the goal of demonstrating guilt. Indeed, "to demonstrate" contains the same root as our word "monster." The monstrum was commonly a deformed birth of animal or human, a physical, tangible, living example of the gods' displeasure. Monstra (human monstra included) were usually killed at birth and it is only when they are allowed to thrive secretly and later exposed that their status as divine warning comes into fruition. Livy tells the tale of an intersex child allowed to live to the age of sixteen and who was sent out to sea to die when discovered; the parents allowing such a child to live only compounded the sin (Livy XXXI.12).

And there were also ostenta and portenta, "showings" and "portents," which while some philosophers and writers tried to classify them differently from the aforementioned prodigia and monstra, essentially ended up being synonyms for the entire family of supernatural happenings. The basic common thread through all of these evil omens is that they were a) not of the natural order of things, b) unexpected and unasked for, and c) did not have a science of interpretation that could give Roman religious minds an easy, formulaic way to expitiate the obvious, yet unknown, sin.


At this time it was reported to the king and the senate that there had been a shower of stones on the Alban Mount. As the thing seemed hardly credible, men were sent to inspect the prodigy, and whilst they were watching, a heavy shower of stones fell from the sky, just like hailstones heaped together by the wind. They fancied, too, that they heard a very loud voice from the grove on the summit.... In consequence of this prodigy, the Romans, too, kept up a public religious observance for nine days...

About one hundred years ago, if anyone was so credulous as to think that stones had ever fallen from the sky, he was reasoned with:
In the first place there are no stones in the sky:
Therefore no stones can fall from the sky.
Or nothing more reasonable or scientific or logical than that could be said upon any subject. The only trouble is the universal trouble: that the major premise is not real, or is intermediate somewhere between realness and unrealness.

Charles Fort. When we think rains of frogs and odd supernatural happenings in the 21st century, we very often classify them as Fortean events. Surely, before Fort, the Age of Reason sought to shove these happenings back into the books of ancient history where they belonged. Fort lives in an era where not just spiritualism and the occult but also hard science are entering into new theories and new worlds and his trademark cynicism towards Tradition makes him a modern-day augur, throwing the books away and taking the unwanted oblations of the "gods" as they come.

Fort's belief-system is only that "you must witness this and not ignore it." Again, this is the behavior of a Roman soothsayer. Whether he believes in higher powers causing the Forteana he catalogues, that is a bit more difficult to discern. Fort's general feeling (although it changes from book to book and from chapter to chapter) is that we as human observers lie to ourselves and to others as suits our needs; whether this is through scientific positivism that ignores the supernatural, or the fact that perhaps these unexpected events are illusions or imaginary flourishes that we as observers manufacture ourselves. For Fort, life was a battle between the real and unreal.

So it was human-focused. Unnatural happenings are not secret signs of sin sent by a god. If anything, they are mocking, random occurrences that expose the "sin" of positivism. Surely, Fort played with the idea of life on Earth being a "zoo" in his unpublished novel X, where Martians control all aspects of life on Earth, but I believe there's a reason why it and Y (about a Secret Race on the South Pole in a similar position) were never published; Fort never sought to blame one entity or group for the Forteana he catalogued obsessively. These events were just the way the world was. He delighted in it, unlike our Roman augurs. What the Romans (and, to a certain extent, we moderns) find unheimlich, he found as evidence for a continuum of reality, one that denied certainty, denied our senses, and extolled the random. Charles Fort was an augur and a soothsayer, surely, but one with no fear of the gods. To him, any entities in charge of these events are "giants sound asleep... harlots... clowns," (Book of the Damned ch. 9); essentially, mischievous demiurges with no motive or agenda at all. Our scientists' anger at the out-of-place-ness of these events is not their goal, but all the same... Fort laughs.
Posted by Michael Grasso at 6:42 AM