Tickets of the Gods: Cultic Practice in Roman Egypt 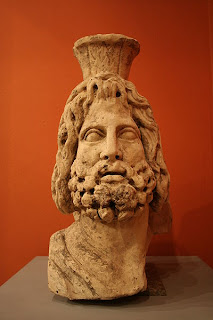 A couple of years ago I had occasion to gather a lot of information on the social fabric of Roman-occupied Egypt in the early 3rd century CE. Layer after layer of culture existed in communion in Alexandria at this time: native Egyptian, Hellenistic Greek, occupying Roman, and diaspora Jewish. From this melting pot of cultures came a veritable hydra of Christian (and quasi-Christian) Gnostic sects: the Valentinians, the Sethians, the Basilideans. (My everlasting devotion to late antique Mediterranean Gnosticism will likely result in a future post.) But the religious interaction I probably found most interesting was the interplay of Egyptian, Greek, and Roman sects.

The first thing to take into consideration is that the conquering Greco-Romans from across the Mediterranean were very conscious of the deep historical pull that the Egyptian gods held over their subject peoples. Both Greeks and Romans utilized syncretic cults to win over the native Egyptians. Most notable of these was the Hellenistic god Serapis. Serapis was specifically designed to evoke a harmonious union of Egyptian and Greek cultic symbology. By the time the Romans took over Egypt, Serapis had a three-hundred-year-old cult of his own, and an important role in the social fabric of Alexandria through his temple the Serapeum.

When the Romans arrived, a primarily Hellenistic culture was ready to receive the Roman religious/political infrastructure typically enforced on the colonies. Egypt was the breadbasket of the Roman Empire, and as such the security of the grain sources was paramount. The Romans institutionalized the Nile cult, which had existed in a less organized, more popular form throughout Egyptian history. It's believed that a temple of Kronos/Saturn in Alexandria, its location now lost, served a very similar role to the one in Rome; it was the Imperial treasury and thus a very important locus of Roman power in arguably the richest province of the Empire.

Popular Egyptian religion, while it was systematically syncretized and marginalized, survived in thousands of local cults, headed typically by neighborhood priests who served an important social function as a cross between priest, ward boss, and local magistrate/judge. Temple festivals in both city and country would be organized by these neighborhood "bosses" to consolidate their political power and demonstrate their largesse. Outside of the institutionalized worship of temple centers, individual homes would typically have household shrines for gods like Bes; one Roman census of Alexandria in the early fourth century CE noted that the traditionally Egyptian quarters of town had over 2,000 "temples," although these could be as simple as the aforementioned household shrines or even street-corner relief carvings meant as a reminder of a local god's power. 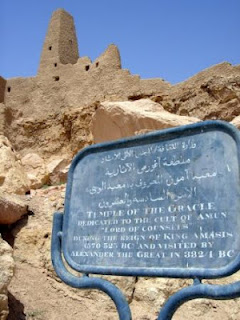 One of the most fascinating Egyptian religious practices was that of the oracle. The oracle was typically a shrine or statue which acted as a consultative force in a given cult. Put simply, petitioners would put questions or disputes before the statue of the god and the god would indicate an answer. By some accounts, the oracle was a complicated mechanical simulacrum with full movements and voice. (While this might seem unbelievable, the mechanical arts in Roman Egypt were certainly advanced as the case of Hero of Alexandria demonstrates.) Some oracles were giant shrines carried by scores of worshippers; in the case of an oracle of Sobek, the crocodile god, mummified crocodiles stood on plinths beneath which were hiding places for the "voice" of the god (in the person of a cult priest). Again, this oracle would more often adjudicate petty disputes or give quotidian advice to the petitioners than grant theologically-significant utterances in the tradition of the literary oracles.

As time went on and as Greek and eventually Roman rule was established, Greco-Roman cultural norms led to Egyptian cults moving away from "voice" oracles and to "ticket" oracles: essentially instead of a priest providing a voice in a theatrical, performative manner, the petitioner would present his or her case, often times in writing to the oracle, and the oracle would return a written response, often canned or pre-written. At the risk of sounding overly irreverent, this is the ancient version of the fortune cookie or the Magic 8-Ball.

On a more serious note, this transition to ticket oracle seems to reveal the influence of a foreign literate religious culture on the native Egyptians. It's notable that in the Roman era the native Egyptian population was losing its transitional language of Demotic after Greek had become the lingua franca of Hellenized Egypt and Latin had been established as the language of government bureaucracy in the Roman era. Latching onto a written religious cultic praxis seems to indicate, at least to me, a troubled culture reaching out for some form of legitimacy in the aftermath of two conquests over the course of several centuries.

An excellent source on the conflicts between native Egyptian and Roman religious practice and especially the parts of this post on Egyptian oracles is David Frankfurter's Religion in Roman Egypt: Assimilation and Resistance (Princeton University Press, 1998).
Posted by Michael Grasso at 7:59 AM