ULTIMA PRESENTED AS A SERIES OF OCCULT AND RITUAL ACTIONS 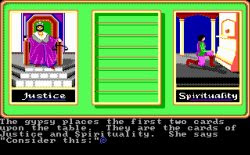 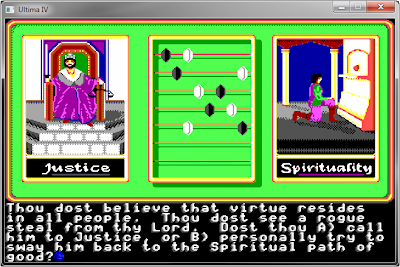 While it is impossible to overstate the influence of the Ultima series of computer role-playing games on the CRPG genre, the Ultima star has fallen far since the heyday of 1993.  After the Origins design studio was brought under new ownership, Serpent Isle was rushed to market with roughly a quarter of its storyline cut, the disappointing Pagan’s gameplay centered on a series of jumping puzzles, and it was five years, three design teams, and multiple generations of technology before Ascension, which failed on every possible level.  In the decade and a half since Ascension, the only output bearing the Ultima name has been a stream of cancelled projects, a browser-based game with only a titular link to the franchise, and the Ultima Online MMO’s slow march into oblivion.  We’ll have to see what the future holds for the recently-announced Ultima Forever, but the track record isn’t good.


Thus a generation of gamers have grown up ignorant of what was once generally accepted to be CRPG’s greatest franchise, a series of games telling the story of the Avatar of the Eight Virtues, immortal ally Lord British, and their struggles against the forces of evil, ignorance, and the Guardian (a Satan figure).  The most memorable aspect of the game, to my mind, is how after the first three in the series, the significance of monster-killing dwindled steadily.  For all their usual CRPG trappings of hit points, levels, magic swords, and fireballs, the later Ultimas severely deemphasized combat within the narrative.  As early as Exodus the final “boss” of the game was not something that would be defeated in a climactic battle.


Wandering around killing things was not a path to progress in the Ultima games; to win the player needed to perform various noncombat actions which invariably took on ritual significance.  When the narrative pits the avatar against some antagonist, the solution is far more likely to be ritual magic than a commando raid.  I’m almost certain it’s possible (if difficult) to complete False Prophet without killing anyone; if there is mandatory violence it can’t be in more than one or two places.  Further, each game, beginning with Quest of the Avatar introduced a new philosophical or ethical framework into the mix, from the Eight Virtues of the Way of the Avatar (Truth, Love, and Courage giving rise Honesty, Valor, Compassion, Justice, Honor, Sacrifice, Spirituality, and Humility) to the Gargish Mysteries of Control, Passion, and Diligence to the Ophidian Law/Chaos framework (Ethicality, Logic, and Discipline balancing Tolerance, Emotion, and Enthusiasm) to the Guardian’s parodic anti-Virtues (Sobriety, Punctuality, Obedience, and others).  What follows are the magical and ritual actions the player must perform to complete each game in the series.  The list also gives a sense of how Pagan went off the rails.  By my count there are 131 ritual actions, excluding the wreckage that is Ultima IX.


1) Earn initiation into a minimum of two occult groups (the sailors and the spacers).
2) Claim the four gems of mastery.
3) Learn the auspicious location for the next step.
4) Travel backwards in time to the eve of Mondain's Great Working.
5) Destroy his Gem of Immortality, rewriting history.


6) Claim the Quicksword, an artifact from outside time.
7) Seek out and receive baptism from "Father Antos."
8) Travel backwards in time to the antediluvian age and slay another evil wizard, Mondain's protege and child-bride Minax.


9) Find the hidden way to the magic land.
10-13) Undergo four rituals of scarification, becoming branded with the Marks of Fire, Kings, Snake, and Force.
14) Compel the Earth Serpent to do your bidding.
15) Receive the benediction of the Lord of Time.
16) Exorcise the magical construct EXODUS using the cards of Love, Sol, Moons, and Death.


17) Claim the Eight Runes…
18) …and Eight Stones of Virtue.
19) Find the Lost Shrine of Spirituality in the Supernal Realm.
20-27) Achieve the Eight-Part Initiation into the Way of the Avatar.
28) Seize the Skull of Mondain and destroy it.
29) Defeat a, no lie, infinite army of demons.
30) Open the way to the Abyss with the Bell of Courage, Book of Truth, and Candle of Love.
31) Navigate the Abyss and find the Codex of Ultimate Wisdom. 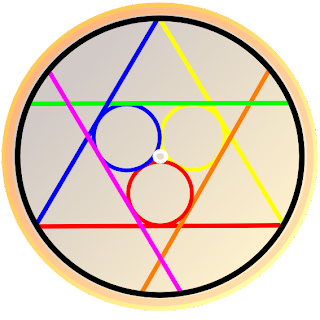 
32-39) Visit the Codex eight times and learn the Inner Wisdom of the Way of the Avatar.
40) Assume leadership of the Resistance, an occult society,..
41) …while infiltrating the highest ranks of the Oppression, a diametrically opposed society.
42-44) Find the three enduring shards of Mondain's Gem of Immortality…
45-47) …and ritually destroy them.
48) Receive fourth-degree ordination in the Way of the Avatar from your Holy Guardian Angel, which appears in your dreams as an apparition of Lord British.
Seven times Seven) Speak the holy words, and descend into the "Hole in the World."


50) Communicate with the preternatural Wisps, and learn the secret word that destroys the world.
51) Learn the magic language Gargish.
52) Accept the Amulet of Submission.
53-55) Enter rapport with the spirits of Mondain, Minax, and EXODUS.
56) Achieve the least initiation into the traditions of the Gargoyles.
57) Transverse the impassable mountains of rigor.
58) Assume control of the extratemporal Vortex Cube.
59) Master the moonstones and Orb of the Moons.
60) Alchemically wed the Way of the Avatar to the Gargish tradition by banishing the Codex back to the Abyss.


61) Undergo ritual initiation into the Knights of Carabus, another occult society.
62) Recover the Tripartite Key of Truth, Love, and Courage.
63) Open the Chamber of Virtue.
Eight times Eight) Claim, then destroy, the Eight Talismans of Virtue, achieving the highest possible initiation of the Way of the Avatar.


65) Join the Fellowship, yet another occult society.
66) Endure ritual initiation into full membership of the Fellowship.
67) Defeat the ritual wards and wake Penumbra the Dreamer.
68) Find the lost race of Emps.
69) Communicate again with the Wisps.
70) Ride with the Ferryman to the land of the Dead.
71) Free the Dead from their enslavement to the dark lich.
72) Volunteer to sacrifice yourself in the Well of Souls.
73) Learn the Answers of Life and Death.
74) Acquire patronage of the extratemporal Lord of Time.

75) Defeat the Monster in the Tetrahedron using the Glass Sword.
76) Return to the hidden magic land (see #9 above) and bypass its wards.
77) Break forevermore the tidal power of the Moons.
78) Sit in the Seat of Virtue, and detonate the Black Gate.
79-81) Visit the Isle of Fire and achieve the initiations of Truth, Love, and Courage.
82) Claim the Blackrock Sword and its slave Arcadion.
83) Replicate the alchemical banishing of the Codex with the core of EXODUS.


84) Open the Labyrinth of Worlds.
85) Pass the tests of the Scintillus Academy Final Exam, winning initiation into still another occult society (albeit one already destroyed).
86) Rouse the spirit of Praecor Loth, King of the World.
87) Crash the flying castle, Killorn Keep.
88) Navigate the Supernal Realm.
89) Bind an elemental prince of wind into your soul.
90) End the world of Talorus and bring about the next.
91) See the future.
92) Blow down the walls of ignorance by releasing the bound prince through a magical trumpet. 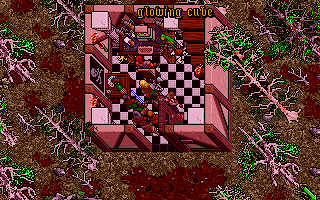 93) Take the Test of Knighthood and join the Knights of Monitor.
94) Endure the ritual bloodletting of the Test.
95) Meet and slay your totem animal (you’re not hardcore unless you live hardcore).
96) Accept ritual scarification (tattooing, this time, instead of branding as in #10 to #13).
97) Summon the Great Sea Turtle.
98) Witness the rebirth of the Phoenix and claim her Egg.
99) Create life.
100) Loose the demon Arcadion upon the world.
101) Achieve the second degree of initiation into the Gargish mysteries.
102) With the Helm of Courage, Rose of Love, and Mirror of Truth, break an eons-old enchantment.
103, 104) Loot the Temple of Order and the Temple of Chaos.
105) Leapfrog initiation to the highest level of the Ophidian mysteries.
106) Plant the Tree of Balance.
107) Resurrect the dead.
108) Bring about the apocalypse (again).
109) Exorcise your three possessed companions using Ophidian rites.
110) Sacrifice your closest friend.
111) Open the Wall of Lights and escape this mortal coil into the Supernal Realm.
112) Restore the Great Earth Serpent (fixing a problem you started back at #14).
113) Bind your dead friend into permanent magical bondage.


114) Witness the Ceremony of Eternity and earn initiation into the Adepts of Earth, a necromantic occult society.
115) Apprentice yourself to the necromancer Vividos.
116) Summon the shades of dead necromancers of epochs past, and learn their wisdom.
117) Speak to Lithios, Titan of Earth.
118) Inter the elder necromancer Lothian, elevating your master Vividos to leadership and yourself to pride of place at his right hand.
119) Travel as a pilgrim to the Birthplace of Moriens, a sacred site.
121) Commune with the Zealan Deities.
122) Grant peace to Kumash-Gor, an unquiet spirit.
123) Join the Adepts of Air, another occult society.
124) Hear Stratos, the Mystic Voice, and earn the Breath of Wind.
125) Free the bound Titan of Water, dooming the world to slow drowning.
126) Initiate into the ranks of the Adepts of Fire, slaying those who would stop you.
127) Summon the demon Arcadion and bend him once more to your will.
128) Participate in the Rite of Flame, bargaining with the Titan of Fire.
129) Murder your way to the rank of First Sorcerer, leader of the Adepts of Fire.
130) Assemble the blackrock “key of the world” from elements of earth, wind, water, and fire, and open the world of Pagan to the Void.
131) Slay the four Titans of Pagan and claim the office of Titan of Ether.


Ultima IX: Ascension (1999) is a hideous mess but its original script called for the main character to complete a reckoning on the world of Britannia, Book of Revelations style, destroying both the Guardian and Lord British in an act of apotheosis.  This would have been, by my count, the fourth time the Avatar destroyed a world in some kind of fiery apocalypse, excluding the earthquakes and disasters which supposedly heralded the ends of each of the first three games, and which were incidental to the player’s actions.
Posted by Jeff at 7:00 AM