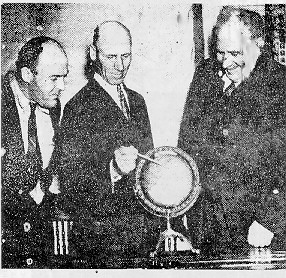 I grew up in a town on the edge of the Quabbin Reservoir here in Massachusetts, and the lore of the reservoir and its creation has always been fascinating to me. In brief, as happened all around the country in the early 1900s the cities were outgrowing their long standing water supplies and areas were taken by the state to provide for them. In this case four towns in central Massachusetts were "disincorporated" in 1938 and the valley they lay in was dammed up at one end and flooded. It was a breathtaking civil engineering project, stripping down buildings and structures the area, relocating cemeteries, building the twenty-five mile long aqueduct to carry water (partly uphill) to the Wachusett Reservoir (itself constructed by flooding out parts of several towns thirty years earlier) on its way to Boston.

The four towns taken to make the Quabbin Reservoir - Dana, Prescott, Enfield and Greenwich - legally ceased to exist at 12:01AM on April 28, 1938. The disincorporation came as no surprise; the state had passed the legislation to create the reservoir over a decade earlier and the population of the towns had been steadily dwindling as people prepared for the event.

On April 27th the firefighters from the town of Enfield held a parade and a farewell ball to mark the end of the towns. Well, they tried to hold the parade but not enough firefighters showed up so it was cancelled and instead horses draped in black pulled one of the town's old fire engines through the streets to the town hall, a funeral caisson for four communities. The ball however was a huge event with several thousand people in attendance. At midnight the orchestra stopped playing and silence filled the hall as the town ceased to exist.

The above picture is one of my favorite artifacts from the last days of the Quabbin towns. It was taken on April 21 at the final town meeting of Greenwich.  At the urging of a newspaper photographer the three town selectmen appear to be gleefully erasing the town from the globe (in their defense, the men were said to have been "disgusted" by the photo and deeply regretted it later). Any mystical or psychic implication of such an act is best left as an exercise for the reader. Sadly I don't believe there is any occult significance to the date; a brief scan of the internet suggests only that it was the anniversary of Lincoln's funeral procession leaving Washington and that it was the 2691st birthday of the city of Rome.

As this blog is dedicated to the weird and forgotten, I feel the Quabbin towns have a special home here. I can't help but wonder what it must have been like to have been a resident of those towns attending that farewell ball, hearing the clock strike midnight in the shadow of the dam that would quite literally wipe the place you lived from the earth.

Posted by Christopher Tatro at 11:06 AM