L.A. Verde: Reptoids in the City of Angels

Behind all the paranoid racist delusions, before all the crackpot theories about alternate divergent evolution, there was G. Warren Shufelt. 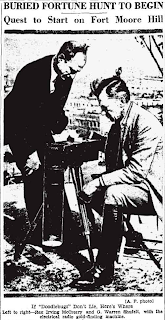 G. Warren Shufelt was a geophysical engineer who stated in 1934 that a series of catacombs existed underneath Los Angeles holding incalculable wealth in gold. These catacombs, he said, were built by an ancient hyperintelligent race of humans who venerated lizards. You can read the L.A. Times article here, on Strange Maps, which is a damn excellent blog and a huge personal inspiration for Renfusa.

In any event, Shufelt said he was able to scan and map these catacombs using a "radio X-ray device" (it's a shame he didn't do this investigation 15 years later, or he could have included RADAR in that list) and drilled a shaft straight down through Sunset Boulevard. More cannot be said, as the veil of history precludes us knowing whether Shufelt found the legendary gold hoards and magical tablets of the Lizard People.

Whoa. Where to even begin here. Let's talk about what was going on in the 1930s first of all. The Depression? Most definitely. Get-rich-quick schemes would not have gone amiss and with a supremely indulgent media like the L.A. Times, I can't imagine Shufelt didn't have a few desperate yokels begging to invest in the Lizard People Con. But let's delve a bit deeper into 1930s America. What else was going on in the esoteric fields that would lead to a story like this appearing in a respectable newspaper?

The concept of a Hollow Earth filled with superior (or debased) beings had been circulating in esoteric circles for centuries. For some reason (outside the scope of this post), it especially took root in America. These disparate threads of a Hollow Earth, an Ancient Race1, and Ascended Masters all found themselves woven together in the "I AM" movement of Guy and Edna Ballard. 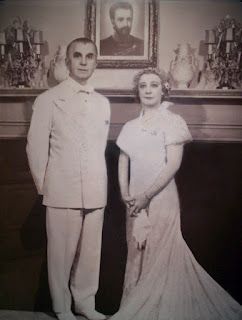 Guy Ballard was hiking on Mt. Shasta (in California!) one day and just happened to come across the Comte de Saint-Germain. Well, isn't that a convenient coincidence. This chance meeting led to Guy and Edna regularly corresponding with the Ascended Masters and founding the "I AM" Activity which claimed up to a million adherents by the end of the 1930s (including some members of the Silver Shirts). Of course, it was around that time that Ballard died suddenly and Edna and her son were convicted of mail fraud. But still, if there was a signal cult/alternative religious movement of the Great Depression, it was "I AM."

Is Mt. Shasta a gate to an underworld full of ancient races? Well, there have been others who've claimed so, in much the same way that Ballard and Shufelt did: through invisible waves of words and images. Let's also not forget that Ballard was a mining engineer, much like our friend Shufelt. Slightly disparate threads weave and reweave and remix and coalesce, until you have someone like Richard Sharpe Shaver who creates his own personal outsider mythos from the mélange of beliefs in this particular group of tropes.

Oh, right. And even before Shaver, and the Ballards, and Shufelt, there was this dude, and this early story he wrote. And his friend, who wrote another.

Which brings us back to Shufelt's tragically misnamed "Lizard People." Not actual lizard people or Reptoids at all of course, but the name quite obviously evokes links to all that stuff above, and the later link here actually comes from UFO lore. The UFO era begins in 1947, obviously, but there's been a long tradition of people believing that aliens or ultraterrestrials dwell and abduct people from underground (see the aforementioned faerie mounds from my faerie post). Sometimes these are even direct representatives of the Reptoid group. And of course this belief was later conflated into UFO myths about secret underground military bases as well as the belief that there are multiple saucer bases here on earth, hiding in Mt. Rainier and... yes, you guessed it, Mt. Shasta.

1 Madame Blatavsky's "Third Root Race" were the Lemurians: they were black-skinned, laid eggs, and coexisted with dinosaurs. I'm not even going to begin unpacking that one.
Posted by Michael Grasso at 8:27 AM