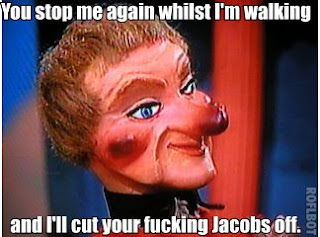 I have to say I was never afraid of her, but I always felt something was...off about Lady Elaine. Her appearance, right off the bat. In stark opposition to the other denizens of the Neighborhood of Make Believe she's pretty damn ugly. The red cheeks and nose always made me think (even at a tender and innocent age) that she was drunk ALL THE GODDAMN TIME. She was sarcastic in a show otherwise so straight you could build a house with it. The haircut was doing her no favors at all.  And the Batiuk-esque smirk and raised eyebrows, her face eternally frozen in a mocking superiority. She was, in a word, odd.

This all came about  from an off-hand comment I made on Twitter that led me down the darkened alleyway of a Neighborhood of Make Believe/Snatch mashup  But never mind that. As one does, I turned to Wikipedia to fill in my spotty memory of other characters who lived on the other side of the trolley tracks. And the entry on Lady Elaine (sub-entry, actually, nested with all the other "Regular Puppets." I bet that would have burned her biscuits) is of course fascinating.

I recalled that Lady Elaine was frequently the antagonist of the vignettes due to selfishness or stubbornness or some other character flaw. What I didn't recall was that she was apparently a fucking sociopath and that the nigh-omnipotence of the Boomerang Toomerang Zoomerang allowed her to bend reality itself to her freakish whims. Observe:


She is afraid of vacuum cleaners and regards them as weapons. In one episode she attempts to destroy all vacuum cleaners that are not in her possession. At the end of the program Mr. Rogers says to the audience "I'm glad you're old enough to talk about your problems and not just wipe things out like Lady Elaine".

Sweet merciful dumptruck! Was this episode targeted toward the preschool scions of the Olympus? Or the newly incarnate Beyonder, learning to pee in Peter Parker's apartment? What the hell kind of lesson is that, Fred?

She uses her Boomerang to turn the Neighborhood upside down or to move buildings around or cover all the paintings in the neighborhood with clay or to basically do whatever the hell she feels like.

So I began wondering what, exactly, Fred Rogers intended in creating this character? Could she be the Devil?

Let's dig for clues. Wikipedia informs me her favorite color is red (that works), as noted above she is terrified of vacuum cleaners (a trait more common in housecats than in supernatural manifestations of evil), sh plays the accordion (an instrument second only to the bagpipe in the eyes of Satan), and that she has a thing for roosters. Roosters are usually associated with the sun due to their unholy practice of screeching at the first sight of the damnable thing. But in Norse lore they're messengers from the Underworld. That's interesting at least. Not sure where to go with it.

In the end I seriously doubt that devoted Presbyterian minister Fred Rogers would have a character on his show representing Satan (although the temptation to run with a Daniel Striped Tiger/Christ analogy is powerful). Especially since at the end of every episode where Lady Elaine causes trouble with her magical powers, she puts everything back to rights again, and everyone in the Neighborhood accepts and tolerates her and knows that she's just acting out due to low self-esteem (whaaaa? I never caught that when I was a kid. As noted above, I just figured she was constantly hammered). So she's more of a mischievous god-figure, a trickster who really has a heart of gold underneath that brash exterior.

Whatever she was though, she was definitely unsettling to my five year old mind and apparently to lots of other kids out there too. It's probably a testament to the genius of Fred Rogers that he never smoothed her out, never made a new puppet without the W.C. Fields-like cheeks and Doctor Smith eyebrows, never diluted her personality with "nice." She was a bit of odd in a sea of nice and normal. And scary as she may have been, I loved her for it.
Posted by Christopher Tatro at 8:56 PM