This post originally appeared on my gaming blog, but it really fits much better here. 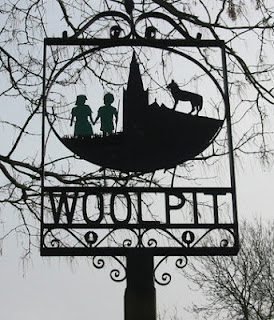 "Then (I say) the earth and they be planets alike, moved about the sun, the common centre of the world alike, and it may be those two green children which Nubrigensis speaks of in his time, that fell from heaven, came from thence."
- The Anatomy of Melancholy, Robert Burton, 1621

A few months ago, cross-surfing through my various Forteana blogs, I came across this entry (great blog, by the way, you should add it) on a medieval legend I'd never heard of before: the Green Children of Woolpit. The Wikipedia entry is startlingly detailed, and pretty much gives you all the historical context and occult fodder one could ask for, so I won't repeat it all here. Go read it, it's a rip-snorter. Instead let's take a closer look at the Green Children, and decide where indeed they came from.

The village ostensibly got its name from a pit used to trap wolves, and this is where the two children appeared. Meat and offal was put into the pit to attract the wolves, and then they would fall through the branches laid on top and be easily dispatched. Two children, wandering from the wilderness, attracted to a trap set for wolves? Obviously a pair of feral children brings to mind the founders of Rome, Romulus and Remus. Tales of children raised in the wilderness by beasts are as old as civilization. But just as Romulus and Remus reached maturity as shepherds, the two Green Children came to Woolpit suddenly while "herding their father's cattle." Both pairs of siblings were liminal, aliens due to their upbringing but still on the edge of civilization due to their respective professions. The sister was later believed to have taken the Christian name Agnes; of course medieval wordplay conflated Agnes with agnus (lamb).

The siblings, said the sister after her brother had died (a few days after being baptized!) came from a place called "St. Martin's Land," where "the sun never rises." The sister asserted they did not know how they came here, but that they had followed some lost cattle into a cave and emerged after hearing the sound of the village bells. Ralph of Coggeshall's account states in their homeland, "everything is green." Their green color was said to fade after time in Woolpit, but the first thing they were able to eat were "green beans."

Of course this brings to mind vegetation spirits, dryads, and all manner of fae, but what of the caves and the twilit land they came from? Fairies who dwell underground are part and parcel of fae lore, but how could a vegetable spirit survive in a land without sunlight? Perhaps they were not vegetable, but fungal?

The flipside of them being fairies is, of course, that they were extraterrestrial, or indeed ultraterrestrial in the manner of a Jacques Vallée. Modern UFO lore speaks of Greys who create bodies from vegetable matter; might the Green Children have been the first of a wave of alien-human hybrids, their DNA patched with plant matter?


There were no railroads and few roads outside the region, so the community remained small and isolated. The Fugates married other Fugate cousins and families who lived nearby, with names like Combs, Smith, Ritchie and Stacy.
Benjy's father, Alva Stacy showed Trost his family tree and remarked, "If you'll notice -- I'm kin to myself," according to Trost.

For a more mundane explanation, we could turn to stories of diseases and genetic disorders. It's long been theorized that legends of vampirism could be explained away by the disease porphyria. Methemoglobinemia, seen above in the case of the so-called "Blue Fugates," is a recessive genetic disorder that leads to blue skin. The recessive trait is exacerbated by inbreeding. Could the Green Children have been isolated far away from civilization, the product of generations of inbreeding that led to an as-yet-unknown genetic disorder? In fact, there is an anemia known as hypochromic anemia, which produces what was historically known as "the green sickness."


You can have no idea of the number of venerable saws, significant signs, old wives' sooths, gipsies' warnings, and general fiddle‑faddle that has been thrown up by this in the village, lately. We have become a folklorist's treasure‑chest. Did you know that in our circumstances it is dangerous to pass under a lych‑gate on a Friday? Practically suicide to wear green? Very unwise indeed to eat seed‑cake? Are you aware that if a dropped knife, or needle, sticks point down in the floor it will be a boy? No? I thought you might not be. But never mind. I am assembling a bouquet of these cauliflowers of human wisdom in the hope that they may keep my publishers quiet.'

Alien children coming upon an isolated village obviously evokes some of the more powerful tropes in post-war British science fiction (most specifically John Wyndham's The Midwich Cuckoos/Village of the Damned but also the late 1970s' Quatermass serial and the recent Torchwood series Children of Earth). Has the folkloric idea of the alien interloper taking the form of a preternatural child been a powerful one in English history? I'll leave that question as an open one for others to explore.
Posted by Michael Grasso at 8:28 AM