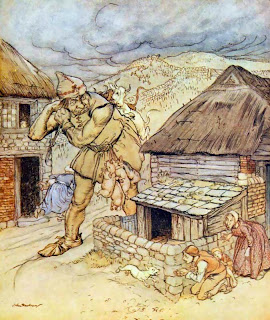 So my new favorite blog (new in that it's new to me, not new to the Internet) is called Seven Miles of Steel Thistles. I forget how I came across it, but the first post I saw was an account in Scots of a woman's encounter with a Fairie-fowks Rade as a young girl. As the author of the blog post says, "as is often the way of folk accounts, [it] is strangely convincing." Convincing, eerie, umheimlich: call it what you wish. It's just the kind of "fairy tale" I love to read. Rooted in the details of the real world, a person or persons becomes temporarily unmoored from reality; forced into liminality and wonder against their will.

But let's back up a minute. Why am I so interested in a blog full of folk tales and ultraterrestrial encounters as well as 18th century and 19th century catalogs of both? Well, it's got very little to do with the political and social aspects of folklorists plundering the oral traditions of the "border peoples" and more to do with the fact that I just really like faeries.

A long time ago I took it upon myself to explain why I liked faeries so much, and, with a few edits, here is something I wrote almost 8 years ago on the subject:


Why do I like faeries? Because they have a tithe with hell, and anyone who chooses to deal with Lucifer is pretty crazy. Because they were gods who kicked out their forebears, like Zeus and the rest of his bunch. Because they kidnap us. Regularly and frequently. In fact, they still do. Because they live in the Hollow Earth. Because they hate Baby Jesus. Among other things. Because they, like the Furies, insist on being called nice things when in fact they're total bastards. Because they helped name a chemical element, and maybe even two, depending on your feeling on nymphs. Because they can sicken your cattle or fix your shoes, and probably both. Because Joan of Arc's voices were faeries, or saints, or both. Because no matter how much Spenser and the Victorians tried to clean them up and arrange them into nice categories, they're still red in tooth and claw. Because they seem to pop up in almost every culture, because we need someone to blame, right? Because they can be gossamer, and they can be vicious. And really, that's the dichotomy at the center of life, no?

One of my favorite recent treatments of faerie in pop culture was the novel Jonathan Strange & Mr. Norrell, by Susanna Clarke. It got a lot of things right, but foremost I think it got the idea of faerie as a place and as a homeland for alien creatures and how men of "science" would interact with them precisely right. Obviously, Clarke was working from a lot of the same 17th/18th century primary sources as you'll see up there in Seven Miles of Steel Thistles. The intersection of the Age of Reason with the long-held superstitions in folklore and how people sought to organize and categorize these dangerous tales is a great story: a study, if you will, in liminality itself.
Posted by Michael Grasso at 8:38 AM