Five things I learned from reading Elijah Wald's The Dozens: A History of Rap's Mama 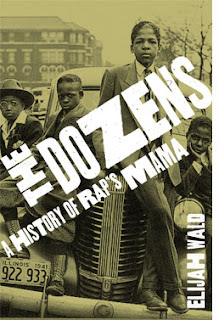 1. The etymology of the term "the dozens" for traditional African-American jesting/insult games is still largely unknown. Wald spends the most time analyzing the possibility that the dozens were simply meant to be traded in groups of twelve, and he provides quite a few rhymes, mostly of sexual boasting, from the early 20th century which were counting couplets. In turn, these are believed to have come down through the 19th century minstrel tradition (in Biblical rhymes turned to comedic ends) from religious twelves leading all the way back to 17th century Latin catechisms. Another interesting possibility for the origin of the name is that it comes from shooting dice, as 12 or "boxcars" is one of the worst possible results. "Shooting" the dozens was a term used in North Carolina, and Wald cites an unrelated dozens blues couplet from 1937 that goes, "De box cars rollin', de baby's a cryin'/I played yo' mama in the slavery time." (Wald 28)

2. The dozens have always existed on the edge of acceptability in larger white culture, whether through the minstrel tradition (both black and white) or during the rise of jazz, Dixieland, and blues throughout the first third of the 20th century. "The Dirty Dozen No. 2," recorded by bluesman Speckled Red in 1930, was a "radio edit" of the original oral-tradition dirty dozens, and you can see easily where the curse words were replaced by the clean version:


The clock's on the shelf going tick, tick, tick
Your mama's out on the street doin' I don't know which (Wald 49)

You can fill in the original rhyme pretty easily there.

Red's clean version led to (no pun intended) dozens of cover and instrumental versions, which further diluted and bowdlerized the original meaning; even Count Basie had a crack at an instrumental cover rendition. But the "real" dozens still persisted in "party" records and underground dirty recordings, most of them sung by female blues artists, who had a peculiar cultural license to be absolutely filthy in some situations where men couldn't. Blueswoman Victoria Spivey, singer of the "boxcar" rhyme above, put a woman's spin on the dozens by telling all about no-good men in "From 1 to 12 (Dirty Dozen).," and Memphis Minnie's "New Dirty Dozen," which took the opportunity to throw sexual insults at a whole family, Aristocrats-style.

3. Wald spends time seeing how white audiences reacted to the uncensored dozens. One particularly amusing story occurred during World War II (Wald cites several stories of white officers and soldiers reacting with shock or bafflement to the dozens during both World Wars) where a white seaman, Tom Wicker, was put in charge of a boxcar full of black sailors and reacted to an invitation to "suck my black dick" from one of the black soldiers by trading jests:


"Why, your buddy there told me you didn't even have one." A fragment of an old joke flickered in [Wicker's] memory. "Said a hog bit it off."
"Shee-it." The tall black sailor grinned. The other blacks laughed, all of them this time, some obviously in relief, some in derision of the tall boy as he thought up his reply. "You git home, man, you ask your girl friend, see if I ain't broke it off in her pussy." The blacks howled with laughter.
"After mine," Wicker said, hoping for the best, "I reckon she wouldn't even feel that little old biddy toothpick of yours."
There was more laughter and backslapping, and even the other white boys grinned, rather painfully.

In addition, Wald speaks of white immigrant dozens traditions in major cities in America in the middle part of the 20th century, picked up on the streets from African-American peers in cases of cultural mimicry.

4. What is the purpose of the dozens? Wald argues for a number of possible social benefits to the ritual, (echoing parallel African verbal traditions that foster social cohesion), but is also not afraid to tackle the negative aspects of the dozens. While the dozens may have served to defuse physical violence and provide a coming-of-age ritual for African-American youth, the actual insults, say many African-American philosophers and cultural critics, foster negative images of blackness, womanhood, and other possible indicators of cultural self-loathing.

The African origins of the dozens are well-attested, and its ritual and cultural significance proven out time and time again. A near-liturgical series of mother-based anatomical insults are said to help solidify and strengthen the ties between the Dogon and Bozo peoples of West Africa, who held belief in common origins that had weakened over time through a difference in religion (animism vs. Islam, respectively) and taboos that prevent sexual intermingling.

Even with the African origins of the modern dozens solidly proven, Wald can't help but find similar traditions around the globe, in as disparate cultures as Elizabethan England and the Manus society of New Guinea.

5. Wald claims the Dozens are "rap's mama" in the title of the book, and while no one could certainly draw a direct lineage from the cultural phenomenon to hip-hop, the idea of verbal duel supplanting physical is a strong tradition throughout rap's history and pre-history. Wald traces the proto-origins of rap to several threads in the 1970s and previous: comedy albums from Rudy Ray Moore and musical descendants of Speckled Red like Jimmy Castor's "Leroy" series. Mama jokes in rap come to their apex through 2 Live Crew's raunchy, Foxx/Moore-inspired albums and exist as a connecting thread through gangsta rap's violent and sexual boasts.
Posted by Michael Grasso at 8:36 AM