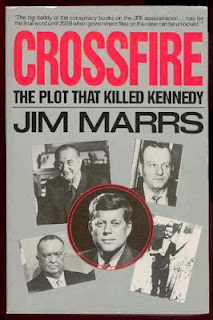 Every 3-6 months or so I'll dive deeply back into the Kennedy assassination. It'll usually start with a re-read of Don DeLillo's Libra, and then either branch off into a rewatch of Oliver Stone's JFK, the British documentary The Men Who Killed Kennedy, or a re-read of James Ellroy's Underworld USA trilogy. This time I decided to go a different route. I asked Amazon to provide me with a good primer on the assassination. Having already bought and been disappointed in Four Days in November/Reclaiming History by Vincent Bugilosi I decided I needed something a little more... well, conspiratorial.

And wow, did Jim Marrs's Crossfire: The Plot That Killed Kennedy fit the bill1. An extensive catalog of all extant JFK assassination conspiracy theories available at the time of publication (1989), it's an excellent concordance to all the other JFK conspiracy media I mentioned above.

There's so much I didn't know in this book that there was no way that a "Five Things" post would be sufficient. But I want to focus in on one of them in particular, and that is the House Select Committee on Assassinations.

Did you know that the House of Representatives in 1979 concluded that John F. Kennedy was probably slain as the result of conspiracy? I didn't. Sure, I may have faintly remembered the afterword to Stone's JFK where this was mentioned, but to read it in Marrs's book was a revelation. To realize that the entirety of the Warren Commission report was admitted by the selfsame government 15 years later to have been utterly worthless was shocking.

Marrs attributes the willingness and political clout of Congress after Watergate to delve deep into government secrecy to getting this far, but admits there were still huge obstructions. Committee heads suspected nearly everyone hired by the Committee of being a plant for the CIA: paranoia and secrecy ran rampant, hampering the Committee's ability to conduct its investigation.

Other notes on the House Select Committee: everyone talks about the rash of suicides, car crashes, drug overdoses, heart attacks, sudden bouts of cancer, and deaths by karate chop in the immediate aftermath of the JFK killing, but no one talks about the second wave of deaths in the late '70s around the Committee's activities. Probable CIA asset George de Mohrenschildt and mob boss Sam Giancana both died of gunshot wounds before they were set to testify (before separate House committees) as did William C. Sullivan of the FBI and Dallas radio host Lou Staples.

There's also the Dallas Police radio recording, another piece of assassination lore I'd never heard of before reading Marrs's book and the key piece of evidence that led the Committee to conclude a conspiracy killed the President. Amazing that in this day and age of advanced computer technology, according to Wikipedia, "digital restoration of the Dictabelt seemed a more distant prospect, with both funding and final approval for the project unlikely to be secured in the near future."

Finally, the life of Lee Harvey Oswald gets a thorough look in Marrs's book. Marrs leans toward the theory that Oswald was military intelligence from the get-go, and that he was trained very early to come across as a misfit, loner, and potential Communist asset within the U.S. Marine Corps and its base at Atsugi. Marrs even entertains the far-out theory that the Oswald who returned from Russia was a Soviet spy and that this spy's body was swapped out for the "real" Oswald post-burial. Oswald's obvious tendency to "double" or "triple" in the months prior to the assassination, working for extreme right-winger Guy Banister while handing out leaflets for Fair Play for Cuba, does lend credence to the "long time intelligence agent" theory, in any event.

The Kennedy assassination truly is like a fractal; it's fully of smaller more minute details seemingly onto infinity. There's no end to the spirals one can spin down.

1 Let's be honest, though: Marrs is a crackpot. He hits the early '90s conspiracy trifecta: JFK, UFOs, and remote viewing.
Posted by Michael Grasso at 8:43 AM