The Worshipful Livery Companies of the City of London

A while back I was looking at the Wikipedia entry for Sacha Baron Cohen after finding out his cousin was a fairly well-known neurobiologist. Looking at the former's educational history, I was bemused to find out his pre-university school was something called the "Haberdashers' Aske's Boys' School," and of course with a name like that I had to find out what was going on there. A school... founded for the sons of haberdashers? Even for the convoluted and idiosyncratic history of English education, that seemed a reach.

Turned out I was not far off. And this is how I first learned of the Livery Companies of London. 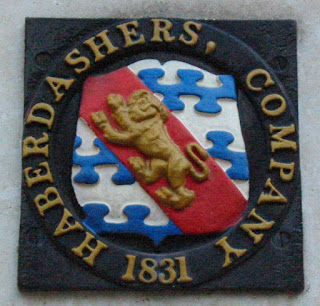 The Livery Companies are just what they seem like at first glance; a group of medieval guilds that survive in various forms to this day. The Haberdashers (sorry, "The Master and Four Wardens of the Fraternity of the Art or Mystery of Haberdashers in the City of London," I mean come on, how can you not get sucked in by a name like that??) are one of the "Great Twelve," the first 12 of these guilds to be formed (don't be fooled by the sign above, the Haberdashers have been around 1448). These guilds were prototypical late medieval guilds, formed to support the skilled craftsmen of the City of London, and as the years went on they took on many patronages, including funding mystery plays, almshouses, and schools.

For me, what fired my imagination was the diversity of these Companies. You can chart the history of London by looking at the "order of precedence," which, while not strictly chronological, does give an idea of the vast range of occupations that have made London their home over the past six centuries. The vast majority of the Companies were founded and given their Royal Charter well after the heyday of the medieval guild, during the rise of London as a world-class city in the 17th and 18th centuries. In these Companies you see the mercantile concerns of the era reflected: the Stationers and Newspaper Makers, the Clockmakers, the Tobacco Pipe Makers and Tobacco Blenders, the Makers of Playing Cards.

While most of the Companies only hold a ceremonial or charitable role these days, some are active in licensing their members. Most notable of these is the famous test of "the Knowledge" given to all London cabbies by the Worshipful Company of Hackney Carriage Drivers. The contrast between the more ancient guilds and the modern Companies is a lovely juxtaposition to ponder; it is difficult to imagine men in Elizabethan or Restoration garb as members of the Worshipful Company of Information Technologists (although I am sure somewhere out there someone is writing a steampunk novel where this Company exists in the Victorian era). The proposed Worshipful Company of Public Relations Practitioners seems a particularly good example of this as well. Other Companies, like the Salters and the Horners, have branched out into modern trades (industrial chemistry and plastics, respectively).

Why does this seemingly pedestrian, anachronous listing of professions fire my imagination so much? The Livery Companies just barely whisper of secret histories. Especially considering the magic woven into the streets of London, the idea of these seemingly vestigial traces of an older London having occult agendas and hidden rivalries in plain sight is absolutely right up my alley. The Companies have ancient secret headquarters, and Latin mottos, and fight for the Order of their Precedence regularly... how could the Companies not contain a secret history waiting to be uncovered‽
Posted by Michael Grasso at 8:48 AM