Vortices of Blood: The Magic of Early Mexico City 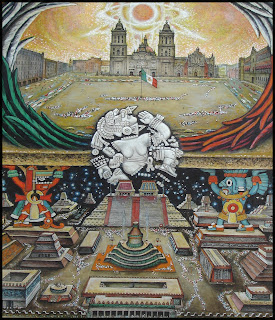 Oh, right. It's finally time to talk about Colonial Mexico City and teleportation.

About a year ago I happened upon the mysterious case of Gil Pérez. Short version: in October 1593, a palace guard in Manila in the Philippines is witness to the news that colonial governor Gómez Pérez Dasmariñas has been slain by mutineers in the Mulaccas. He falls faint against a wall, and wakes up in Mexico City, over 9000 miles away. Imprisoned as a deserter and questioned by the Inquisition, his assertion that Governor Dasmariñas was killed was proven correct by passengers of the next Manila Galleon to arrive in Mexico two months after Pérez's sudden appearance. And then, Gil Pérez disappears from history, after having returned to his post in Manila and returned, one presumes, to a normal, non-teleporting life.

Here's the thing: this isn't the only case of teleportation in the records of colonial Mexico City.

Last month I caught this story on one of my news feeds. It occurred a full half-century prior to Pérez's accidental teleportation, and gives us a very different specimen of teleporter. Father Pedro Ruiz Calderón was a roué and blackguard, a black magician, alchemist, seducer of women, a braggart and a blasphemer who, yes, also happened to be a Catholic priest. During a sojourn in Mexico City, he ran afoul of the local Inquisition and was given a surprisingly light sentence from the local "hanging" archbishop, Juan de Zumárraga. He was exiled back to Spain where he presumably continued teleporting, turning invisible, mesmerizing women and living the life of a mid-16th century alchemical charlatan who claimed to have descended to Hell and stolen the devil's spellbooks.

But Mexico City as a nexus of weird, space-warping power has a bit of a pull, doesn't it? After all, the Spanish had erected their colonial capital on the site of the Aztec Empire's own capital, a city built into an imperial seat remarkably quickly on the bones and blood of massive human sacrifice. And let's take into consideration the thorough decimation that the Aztec population around Mexico City went through immediately post-Spanish takeover, in a sacrifice much more bloody than the thousands sacrificed in the dedication of the Templo Mayor. Tenochtitlan sat on an island in Lake Texcoco, and that along with its uniquely royal/holy status made it a strikingly liminal locale. Early Spanish conquistadores called Tenochtitlan a "dream city," unsure if it was real or an illusion.

That's a lot of heavy, dark power for a genius loci to soak up. No wonder that ambitious magicians like Father Ruiz Calderón were drawn to it, and that an innocent like Gil Pérez, in the aftermath of a smaller blood sacrifice in another Spanish colony half a world away, slipped into its vortex.
Posted by Michael Grasso at 8:47 AM