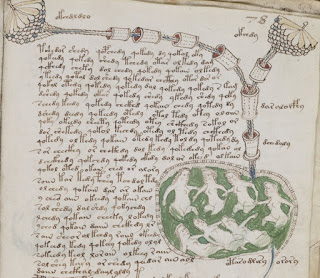 I'm trying desperately to not let Renfusa become a gaming blog. Let's just say that Tuesday night's Mage game, which is now visiting this blog's titular inspiration, found itself in the hoary area where Bacon's New Atlantis may or may not be the secret identity of the Voynich Manuscript. This area has been best explored in this fantastic blog, but what I want to talk about today is what the technology of Bacon's House of Salomon might visually resemble.

Is the New Atlantis science fiction? Well, it is clear that the scientists of Bensalem can do things undreamed of in even the modern era: perpetual motion, changing the sizes and physical properties of animals and plants, weather control, etc. The "what" of the genius of Salomon's House is richly explored, but quite left alone is the subject of "how." And from the "how" would inevitably spring, "what does this look like?" For a man who was seeking to enshrine something close to an experimental method in the courts of Europe, Bacon was frustratingly vague on how all these miracles of Bensalem became commonplace.

Even more interesting to me, from an aesthetic and storytelling sense, is what all this Bensalem tech looks like. If we just go kind of crazy and take as a given that the Voynich Manuscript is meant to be a descriptive missive from Bensalem, one rife with city plans and plans for scuba suits and pictures of women using Bacon's "baths of Adam and Eve," then we have to next ask ourselves, how would a society like this build and design their grandest, most complicated inventions?

Well, the interesting thing about our virtual tour of Salomon's House as detailed in the New Atlantis is that it begins underground. And that the fact they are able to dig deeper than any mine in the real world gives them access to "imitation of natural mines and the producing also of new artificial metals, by compositions and materials which we use and lay there for many years." So not only is Bensalemite metallurgy superior to that of Europe, the House of Salomon are essentially able to create ex nihilo (or perhaps "ex caverna" is more appropriate) completely alien and superior artificial metals. Again, with no explanation as to the "how" except an intimation that distance from the rays of the sun and moon allow this wondrous deed to happen. Remember, the pre-scientific tradition was the metals were found in the Earth's crust due to the influence of the planets (sun and moon included). So essentially what we're looking at here is some kind of "clean room" where fantastic metallurgy can be practiced.

In manufacturing, again, Bacon is frustratingly vague but we get a sense of what the ordinary run of Bensalemites gain from the pioneering work of Salomon's House: "We have also divers mechanical arts, which you have not; and stuffs made by them, as papers, linen, silks, tissues, dainty works of feathers of wonderful lustre, excellent dyes, and many others, and shops likewise as well for such as are not brought into vulgar use among us, as for those that are. For you must know, that of the things before recited, many of them are grown into use throughout the kingdom, but yet, if they did flow from our invention, we have of them also for patterns and principals." Salomon's House holds the patents, and slowly leaks out inventions that provide the greatest benefit. Everyday items are better than European ones, but similar, and they're made by machines.

It's in the crystaltech/vitritech that Bensalem begins to far surpass contemporary European technology. Like the metals mentioned above, Bensalem makes "precious stones, of all kinds, many of them of great beauty and to you unknown, crystals likewise, and glasses of divers kind." And these crystals and prisms are used in the House of Salomon's deceits of the senses: optics allow for magnification at a distance and close up. Optics was a burgeoning science in the 1620s, and Bacon makes sure that Bensalem has already perfected every use possible. Not only can they split light into the spectrum, but they can make full-fledged illusions with their prisms and lenses.

Heading back to Voynich for a second, it's interesting how evenly divided the manuscript is between the organic and the celestial. Plant life abounds in Voynich (indeed as it does in the New Atlantis), and the plants, as unrecognizable to modern eyes as they would have been to someone in the 17th century, seem to be combinations of familiar plants. The House of Salomon has gardens in which they "practise likewise all conclusions of grafting, and inoculating, as well of wild-trees as fruit-trees, which produceth many effects... [coming] earlier or later than their seasons, and to come up and bear more speedily than by their natural course they do." The plants in Voynich are huge and wild and and alien and they grow all over the pages.

Bensalem seems most like our modern world when we look at their skills in transportation and communication. It's strongly implied that the House of Salomon has taken the horse out of the equation for ground transportation ("[we have] swifter motions than any you have, either out of your muskets or any engine that you have.. [we] make them and multiply them more easily and with small force, by wheels and other means)" and that the air and underwater are also opened up to them. Also? Bensalem has the telephone. It's a tin-can telephone, granted, but it's immediately recognizable as a telephone. ("We have all means to convey sounds in trunks and pipes, in strange lines and distances.") A "series of tubes" could honestly describe both the visual appearance of Bensalem and that of Voynich.

The Bensalemites: crystal mages who are skilled in near-instantaneous genetic engineering, fantastic metallurgy, and can make powerful machines and facilitate long-distance communication using clockworks and pneumatic tubes respectively. It's a catalog of crackpot alternative technologies from the 17th century all the way to the present. Taken as a whole, it's Voynichpunk.
Posted by Michael Grasso at 8:40 AM