So the Weather Channel is doing a gimmick where they name all the Winter Storms, akin to the naming of tropical storms. It's not officially WMO-sanctioned, it's just a way for the Weather Channel to increase its presence in our lives with the help of smooth jazz over Local Weather on the 8s. 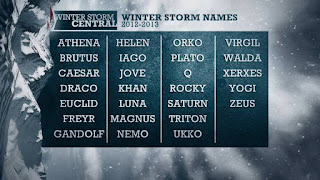 Look at those NAMES, man! It's like a Nerd Murderers' Row. But some of them are not what they seem! To wit:

Gandolf: A character in a 1896 fantasy novel in a pseudo-medieval countryside.

Yup. No joke. Apparently Tolkien's Gandalf has a precedent in a character called Gandolf in the 1896 William Morris novel The Well at the World's End. This novel "is a multi-part 'magical journey' involving elves, dwarves and kings in a pseudo-medieval landscape which is known to have deeply influenced Tolkien," according to Wikipedia. To find out that Tolkien was a fairly blatant rip-off artist, and to find out because of a cheesy Weather Channel gimmick... oy. That's some hard truth there.

And how about this one?

No, not him. With such an overtly nerdy list, you'll excuse my assumption that the Weather Channel meteorologists were hardcore Masters of the Universe geeks.

I'll be interested to see which entities the Weather Channel picks next year. Remember kids, A is for Azathoth.
Posted by Michael Grasso at 9:20 AM