We get the majority of our modern Christmas traditions from Norse and Germanic culture. (This is a tendency we'll be returning to later in this series in a big way.) We can locate the origins of Santa Claus, the advent calendar, the Yule log and the Christmas tree in Northern Europe over the last two millennia. But even with most of the ancient Norse traditions being subsumed into the modern melting pot of Christmas, there are few that persist to this day untouched by the larger superculture. And one of them is Iceland's Yule Lads. 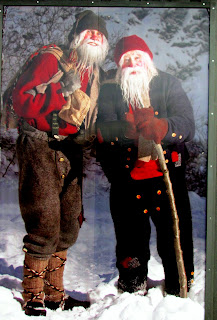 Figures of trickery and mischief run deep in the Christmas traditions of Northern Europe, especially when it comes to punishing naughty girls and boys. In the Yule Lads, we have an autochthonous Icelandic tradition that was actually forgotten for many years in the modern era and resuscitated later on in the 20th century. Probably because the idea of a supernatural creature who is the offspring of a giantess-witch who eats children and whose main idea of mischief is eating the crust off the pans left out overnight might have lost a little of its power in a more modern world.

But yes, the Yule Lads echo the bad household fairies like the boggart in that they invade the home to wreak havoc on the sanctity of its contents. And yes, they have awesome names. I can't pick a favorite between names like Bjúgnakrækir (the "Sausage-Swiper"), Gáttaþefur (the "Doorway Sniffer") and Meathook, a.k.a. Ketkrókur, who uses his long hook to sneak down the chimney to steal the family's meat.

As was stated above, the Yule Lads are the offspring of the terrifying giantess of Icelandic folklore, Grýla. Grýla is a typical witch-ogre of the Baba Yaga type, cooking and eating children with the help of her evil cat (who later joined the Lads as a Christmas-specific Yule Cat). Using Grýla to frighten children at Christmas seems to have started sometime in the 18th century, but her history is more profound than that; she appears as a figure of some fearful esteem in various Icelandic sagas and in various legendaria as a figure in animal skins on horseback who acts as a punisher of men who wrong women. It's hard to resist the interpretation that Grýla's evolution from a primal pagan force of vengeance to a mother-figure in a children's tradition was an intentional one meant to rob her of some of her power.

These days, the Yule Lads are starting to be subsumed into Global Western Christmas; some Yule Lads even wear red-and-white Santa outfits these days in Iceland. But as a resuscitated tradition, they and their ancestors in folklore reach back in time to some of Iceland's earliest settlement and strongest cultural traditions.
Posted by Michael Grasso at 8:37 AM