The 12 Days of Weirdmas, Day 2: Put a Great Stellated Rhombicuboctahedron On Top of the Tree!

Most folks are content to put a simple five-pointed star on top of their Christmas trees. But the Moravian Church has a tradition of putting a three-dimensional star on their trees that can feature anywhere from 26 to as many as 110 points. Where did this tradition start? Perhaps surprisingly, it's widely believed it was invented and developed as a geometry lesson. 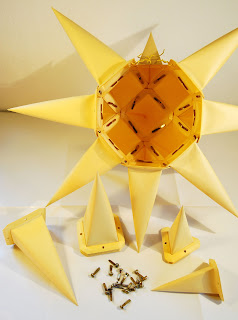 The Moravian Star, as it is now known, was first crafted at the Niesky Moravian Boys' School and apparently spread throughout Germany, even among non-Moravians, as a popular form of the Christmas tree star, and wherever Moravian missionaries went around the world.

The typical 26-point configuration uses the sides of a figure known as a rhombicuboctahedron as bases for the points, or stellations. This doesn't have any special numerological or sacred geometrical significance to the Unity of Brethren or Moravian Church, but the star itself is of course representative of the Star of Bethlehem. 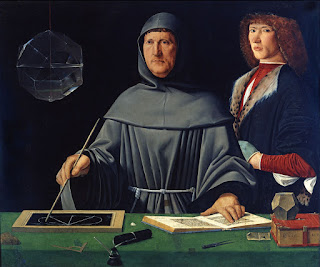 Suspended from the darkened ceiling in front of Pacioli is a glass-sided, water-filled rhombicuboctahedron, along with a solid dodecahedron, whose mysteries we've plumbed previously here at Renfusa. Its purpose and selection in this painting is a mystery, almost as mysterious as the solid in Dürer's Melencolia I. In fact, some believe the figure on the right in the painting could be Dürer, whose devotion to and knowledge of solid geometry is obviously well-attested.
Posted by Michael Grasso at 9:19 AM