We've spent some time in Northern Europe so far in the 12 Days of Weirdmas, but now, let's go south. South to the Roman Empire, where the late Empire's peculiar melange of Pagan, Christian, and neo-Pagan produced the popular date for what became Christ's Mass.

Two threads converge in this story. First, the popularity of new cults within the late Roman Empire generated the cult of the Unconquered Sun, or Sol Invictus, in the late 3rd century AD. This cult drew aspects from existing solar cults, including those of Apollo-Helios and of course the Syrian god Elagabalus, who lent his name to one of the cruelest Roman Emperors of the late period, who was largely believed to be original popularizer of the solar cult.

The sun, of course, would have its "rebirth" ceremony during the longest night of the year, when the days in the Northern Hemisphere would begin to grow again.

At the same time, in the 3rd century within Christian communities, some discussion was given for theological and historical purposes as to when Christ was born. Coming up with the 25th of December for Christmas and the 6th of January for Epiphany seems to have arisen in the Eastern Mediterranean in the late 4th century. We know this thanks to the record left behind by the contemporary Chronography of 354, which interestingly notes both the "birthday of the Unconquered" and the "birth of Christ in Bethlehem," but also due to the detective work of late antique exegetes who noted the pregnancy of John the Baptist's mother along with the date of the Annunciation in Luke.

It's worth noting that theologians such as Origen and Arnobius found the celebration of Christ's birthday to be too similarly idolatrous to Roman and other pagan traditions of celebrating birthdays of Emperors or kings.

And thus begins the shifting of Christ's birthday to civic holiday within the Empire. For a while there was deliberate conflation of Christ with the Unconquered Sun, encouraged by both Christian and pagan adherents. 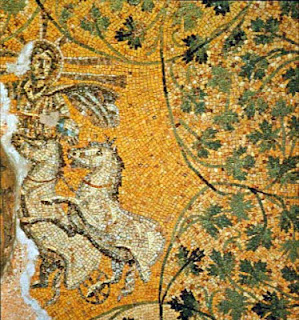 Christ as "sun" of God (obviously the pun only works in English) was a connection not unknown to the early Christians nor unknown to pagan Romans. In one of many examples of Old Testament prophecy of Christ's coming, Christian theologians could cite Malachi 4:2: "But unto you that fear my name shall the Sun of righteousness arise with healing in his wings; and ye shall go forth, and grow up as calves of the stall." And at least a century before the Chronography of 354 there is evidence of a solar Christ, taking on the iconography of Apollo-Helios in a Roman Christian mausoleum. With the slow and final takeover of Christianity in the Roman Empire, an unconquered solar deity whose feast day was at midwinter would jibe perfectly with the Unconquered (by death) Christ whose real birthday was calculated for that same date.
Posted by Michael Grasso at 8:56 AM