The 12 Days of Weirdmas, Day 4: Whatever Happened to the Magi?


And being warned of God in a dream that they should not return to Herod, they departed into their own country another way. 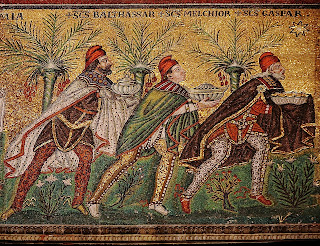 Come on, like I wasn't going to cover the Magi in this feature?

We all know the greatest hits of the three Wise Men: Zoroastrian priest-astrologers, or kings from three different continents (whom every nation in history, it seems, has tried to claim as their own), they offered gifts, probably symbolic of kingship, godhood and death, and then disappear from the story, careful not to tangle with the about-to-mass-infanticide King Herod. But where did they go after following their star to the Nativity of Jesus?

One popular tradition is that the three kings were martyred after later becoming Christians. This purported 4th century account, the Chronicon of Flavius Lucius Dexter, alleged to have been discovered in the 16th century and then widely transmitted in Catholic nations, was later revealed to be a contemporary forgery. Interestingly, many of these falsos cronicones, as they were called in Spain, were written at the height of the Spanish Empire as a sort of cultural valedictory, featuring many purported late antique authors from Roman Spain.

Marco Polo was supposed to have seen the tomb of the Magi, in Saveh in Persia, on his famous journey. While this would at least match the geographical origin of three supposed Zoroastrian priests, no other record has been found in the eight centuries since Marco Polo's visit of this tomb. It is interesting to note that in Saveh Marco Polo supposedly met "fire-worshipping priests," which is the sure sign of a Zoroastrian temple. Whether it is plausible for a prominent Zoroastrian temple to have still remained centuries after Persia's conversion to Islam is also doubtful; a vast majority had fled to India by the time of Marco Polo.

The convoluted tale of the "relics" of the three magi begins with their relocation to Milan from Byzantium in 344. During Frederick Barbarossa's conquest of Italy in the early 12th century, the relics were stolen and spirited to Cologne, where a great reliquary was crafted by Nicholas of Verdun. Were the bones yet another hoax meant to lend authority to a great imperial ruler? Umberto Eco thought so, and the early 12th century was a golden age of the propagation of medieval forgeries.

Posted by Michael Grasso at 8:41 AM