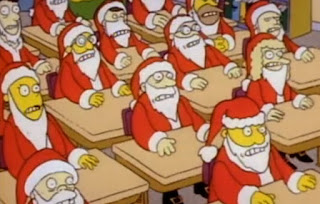 There are a lot of Santa Clauses out there.

I think one of the most interesting things I've discovered doing Weirdmas is that while there is a template for "gift-giving/punishment-inflicting supernatural being who commits B&E on Christmas Eve," in each Christian culture it varies wildly. At first glance, the Dutch Sinterklaas is as close to our Santa as could be imagined; an Earth-2 version, if you will, from an America where the Dutch never gave up New Amsterdam (exaggerated wink to my Changeling players). But dig a little deeper and there's depths to this figure that surprised even me.

First, let's get an unpleasant realization out of the way at the outset. Both Sinterklaas and the German Knecht Ruprecht have historically been aided by helpers in blackface. Both traditions have equivocated that this is because the servants have to go down a coal-filled chimney, but in reality the Dutch Zwarte Piet-as-Moor servant dates back only about a couple of centuries and is clearly culturally "Moorish" and a racist caricature.

But let's go back further than even that. In medieval Dutch, Black Pete was a nickname for a devil, and subsequently these "helpers" were the ones who punished the children and gave them worthless gifts while Sinterklaas rewarded them. In fact, in some tales, the black helpers would observe children to make sure they were good all year long.

Sinterklaas, unlike Santa Claus, doesn't have a sleigh. He rides a grey steed through the sky, often with two black servants who serve as his agents in our world and observers, as his thought and memory, if you will. 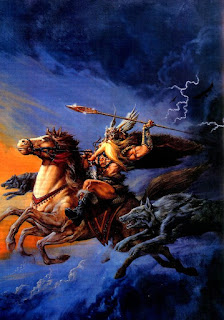 Remind you of anyone?
Posted by Michael Grasso at 8:01 AM