The 12 Days of Weirdmas, Day 8: A Rose By Any Other Name Would Taste As Sweet

Let's do a quick hit on another UK Christmas tradition, this one a bit more modern: the Cadbury Roses collection of chocolates. 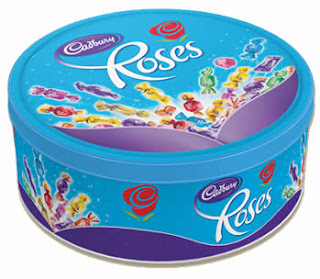 Having just purchased one of these tins for my goodly wife at a local British Isles-import store, I was interested in finding out how they became associated with Christmas and a little bit about their history. For instance, why are they called Roses when they are just a typical non-rosey chocolate assortment?

Well, quite simply, the candies were named for the machinery they were wrapped on. The Rose Brothers manufacturing firm didn't just made confectioners' wrapping machines, they were a supplier of gun sights and turrets in both World Wars. They were supposed to have done some "special work" on the Avro Lancasters flown by the famous Dambusters. Ironically, one of Rose's factories was located in the interwar years in Germany, taken over by the Nazis at the outset of hostilities, and then bombed into oblivion by the RAF!

My own mission now is to assign the 10 types of Roses to the 10 Sephiroth of the Tree of Life. Rosae mysticae et dulcissimae!
Posted by Michael Grasso at 3:34 PM