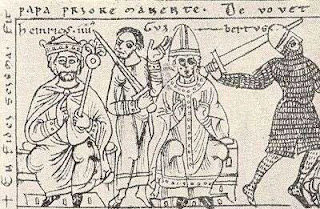 "It's a pardon for 'anything whatsoever, including murder, adultery, or dismemberment of a friend or relative.'"
"Who's that signed by?"
"Both popes."

- Brother Baldrick in dialogue with Archbishop Edmund the Unwilling

A stray tweet on my Twitter feed this morning reminded me of the term "antipope." It's such an evocative term, isn't it? From our modern perspective, almost theoretical and scientific. But for people throughout the history of Christianity, it was a real thing, even an existential threat.

In the early days of the Church, with processes and factions still coalescing into what we'd come to know as post-Nicene orthodoxy, antipopes were fairly common. Even in these early years, future conflicts over state vs. church would be prefigured by antipopes like Felix II and Laurentius, appointed by Emperors for political reasons.

Of course, the Great Western Schism of the late 14th century produced three lines of Popes: one back in Rome after the Babylonian Captivity, the Avignon Papacy, which had existed as the legitimate Papacy throughout the 14th century but was now shut out, as well as the Pisan Papacy, which occurred because well-meaning Church officials tried to elect a legitimate Pope but only resulted in a third antipope.

In these modern days, there is a positive wealth of antipopes, both of the Conclavist ilk, who believe all Post-Vatican II Popes to be illegitimate and thereby proclaim through a lay council their own (anti)popes, and of the "mysticalist" bent, who proclaim their hold on the Papacy through visions and divine revelations. Some even dare to claim the title "Peter II," which as anyone can tell you is anything from a huge faux pas to a sign that the Rapture is approaching.
Posted by Michael Grasso at 8:08 AM