A few years ago, I was running an RPG that shall remain nameless (nameless not because I didn't enjoy it, but nameless because I am desperately trying to maintain the increasingly thin red line that divides this blog from a gaming blog... I'll just say, *coff*sad-eyed Mexican Frankensteins*coff*) and I happened upon Dürer's Melencolia I. This post is not about Melencolia I because a single blog post could never contain even one infinitesmalith of the awesomeness of Melencolia I. No, this post is about magic squares. 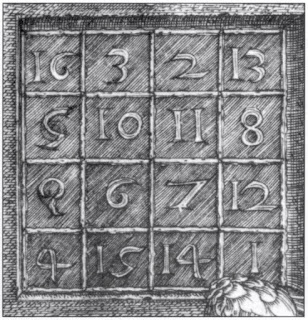 You probably remember these from math class at some point; all the columns and rows add to the same number. If you were a nerdy mathlete like me, maybe you came across it in one of the many math-related books you took out of the public library as a grade schooler. But man, a magic square is more than a cool parlor trick (and yes, according to Wikipedia, there is such a thing as "recreational mathematics," good Lord). A magic square is an abjuration. It's an incantation. It's a protective amulet. It's, well, magic.

Ptak Science Books's blog (really, another must-add if you like Renfusa, go there now and devour the archives, I'm not kidding) recently did a post on magic squares with an assortment of Western and Indian magic squares; seems that magic squares have been a universal human obsession for centuries. Much like our numeral system, the magic square originated in India (and really, can you picture someone trying to squeeze Roman numerals into a magic square? It'd be more like a magic spreadsheet at that point) as well as China, and they were believed to be a true piece of protective magic. According to legend, a turtle emerged from a flooding river with a 3x3 magic square on its shell and from then onwards, people were able to use it to divert floods.

In Europe, as you might expect, a multiplicity (no pun intended) of occult uses were found for the magic square. They were used to communicate and protect against the "higher intelligences" of the superterrestrial spheres: there is a magic square for every planet, depending on how big the grid is. You can then draw sigils based on the gematria value of the angel or demon's true name using the square. Like most Renaissance magic, it feels like arbitrary rules made up by someone with a lot of time on his hands, and that does tend to pretty accurately define Agrippa's Three Books of Occult Philosophy.

There are of course non-mathematical magic magic squares to, dating back to the "SATOR Square" of ancient Rome, also an incantation, but made of letters, not numbers.

To come full circle to Dürer, his magic square not only features the year it was made (1514) but it also features hidden tributes to Dürer's age and his initials, as well as non-horizontal and vertical totals, in addition to being the solution to something called the "four queens problem," which this mathematical and chess layman is not even going to try to unpack.

So yeah. Magic squares. Still magic. And awesome.
Posted by Michael Grasso at 9:25 AM