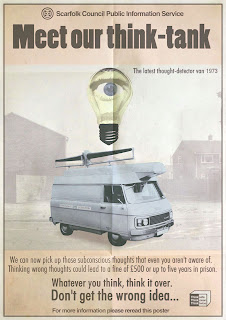 A few weeks ago I was told, "Hey baby, you'd dig it the most" in the manner of one Vincent Vega by our esteemed Mercator Lucis and was sent a link to a blog. That blog is called Scarfolk, and I indeed did dig it the most. Since it seems virtually impossible to explain why it rings cherries with me so resonantly, I'll let the creator of the blog do it for me:


Scarfolk is a town in North West England that did not progress beyond 1979. Instead, the entire decade of the 1970s loops ad infinitum. Here in Scarfolk, pagan rituals blend seamlessly with science; hauntology is a compulsory subject at school, and everyone must be in bed by 8pm because they are perpetually running a slight fever.

Yeah, okay, that's all me. Let's leave aside the entry-level 70s UK Uncanny of the Test Card Girl so shamelessly exploited by Life on Mars, and let's leave aside the childhood memories of Doctor Who episodes set in deserted villages where strange things are afoot and Cold War-era military-scientific edifices loom in the background. Let's even leave aside things like The Red Riding Trilogy, in which the dark grey British 70s explode in a blossom of blood and madness, lit only by dim fluorescent bulbs in dingy police stations. And let's forget the episode of Electric Dreams I watched with my British wife that stated only half of British households at the outset of the 70s had a telephone and most did not have a freezer and which allowed me more fodder for "don't you know there's a war on still" jokes for years to come.

Let's just concentrate on the gestalt of all these things being evoked together perfectly in Scarfolk. 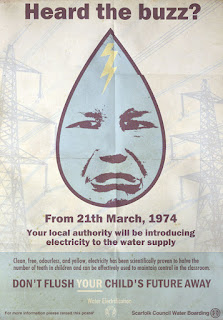 I'd previously written about Electric Eden, which lovingly detailed the rise of British folk-rock and juxtaposed the ancient and the modern. Conveniently for our purposes, this rise happened in the 70s, when a revival of back-to-the-land was happening in many Western nations. The pagan past rises from the misty moors. Combine this with the exquisitely clunky state of technology in the decade and throw in a little bit of trademark British irony and humor and I think that's why Scarfolk works so well. That and the amazing evocation of the era's graphic design. That may just be the mortar that holds it all together.

So go check out Scarfolk. If you agree with me that Boards of Canada should be Renfusa's soundtrack, I think you'll like it and "get" it, too.
Posted by Michael Grasso at 8:41 AM