We Really Should Pay Attention to the Men Behind the Curtains

Amongst my geeky obsessions are personality cults and cargo cults. And honestly, I think they're kind of the same thing at their core: a charismatic person rallies sycophants around themselves with promises of power and wealth, and they attempt to maintain control through often ostentatious displays of pomp, circumstance, and propaganda.

I've long been fascinated by the psychology behind how these cults not only coalesce, but more importantly how they continue. Usually, the center cannot hold and things eventually fall apart. But who are the enablers and apparatchik who keep the machinery working while the con is ongoing? How do they rationalize their actions? How many believe their own hype, and for how many is it simply a paycheck? "They've drunk the Kool Aid" has become a shorthand in our culture for this kind of loyalty, but I've never been entirely comfortable with this sort of hand-wavey, yadda yadda-ing of human mass psychology.

I tend to think about this stuff once a year when the Arriang Mass Games roll around, but it came to the fore ahead of schedule when I saw this video of Newt Gingrich earlier this morning:

We're really puzzled here at Gingrich Productions. We've spent weeks trying to figure out: 'What do you call this?'

Now— putting all politics aside— I don't want this to become a sniggering argumentum ad hominem, where I point at the former Speaker of the House and Presidential candidate— someone who is held up by many as the leading intellectual and historian of his political party— and laugh at the fact he has somehow never heard the term 'smartphone'. After all, this is a man who ostensibly loves science and technology... if you remember from the 2012 primaries, one of his campaign platforms was the building of a manned moon base as a way station for further manned- and unmanned exploration of the solar system. That's some pretty heady, visionary stuff there!

So, I'm trying to wrap my brain around the implications of this video, trying to figure out the world just beyond that camera lens' field of view. And I've come up with five options, none of which bode well for my (already decidedly dim) view of humanity: 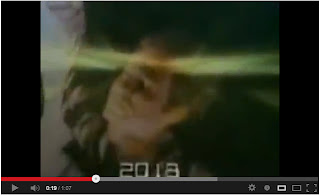 A conversation on Facebook this morning about the early-80s cheesefest Buck Rogers in the 25th Century flung me back to my early childhood, specifically pondering the science fiction media from that era that burrowed deep into my brain, uncanny, eerie details of which I'm still able to pretty clearly recall.

My early childhood was pre-cable. (Again, nostalgia for pre-cable television in and of itself is probably another post entirely, but I digress). In the Boston metropolitan area, that meant three network stations, plus PBS, and then pretty much three independent UHF stations. It's almost startling to realize that until the age of  probably 9 or 10, all television I consumed came to me on seven channels. And so, it's pretty easy to narrow down the programs that had those rich formative effects on me. These are only a few; there are many more but these got shuffled to the top of the deck in my head and so I'm going to respect that and present them first; future entries in this series may feature more obscure memories. 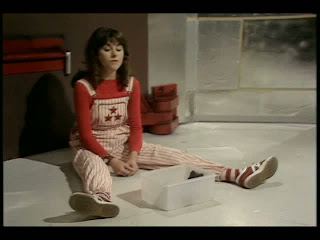 Doctor Who. This is the big one. For large swaths of my early childhood in the late 70s and early 80s, Doctor Who was broadcast on WGBH in Boston (I clearly recall it being on at 7:30, serialized in half-hour format, and that I would watch it with my father or grandmother while waiting for my mother to return home from her late-ish shift at work). And Doctor Who at this time meant only one man: Tom Baker. I seem to remember the early-to-mid Tom Baker-era episodes the clearest: in particular two which I can still recall images from: "The Ark in Space" and "The Hand of Fear."

From "The Ark in Space" I remember the gleaming white walls of the space ark, so emblematic of the clean 1970s futures from movies like 2001: A Space Odyssey. And from "The Hand of Fear" I remember the titular hand (oh, very very clearly, I shiver even now to think about it) and somehow even more uncanny and sinister than that, Sarah Jane going evil and walking into a nuclear fucking reactor. 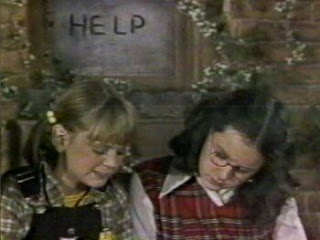 Read All About It. Okay, I guarantee this one is probably just me. But on sick days and summer days home from school, I would watched educational programming on PBS (yes, even when I wasn't in school I wanted to be in school). A vast amount of WGBH's cheap educational programming came from TVOntario, who produced a number of series in the 1970s to teach you about health, economics, French, and... scaring little kids witless.

"Read All About It" was very cheesy; bad Canadian acting, silly song skits and full of hackneyed attempts to get kids to read books. But it was also somehow incredibly cool and frightening. The enemy of the kids of the Coach House/Herbertville Chronicle was an alien tyrant named Duneedon who was also the mayor of the town; in his true form he looked a bit like Aladdin Sane-era Bowie but to a little kid of 6 or 7 he was pants-foulingly frightening.

More primal fear for a nerdy little kid? How about a labyrinth where if you don't solve a puzzle, you're implied to be gruesomely killed or stranded forever? It seemed like the kids were always getting thrown into interdimensional prisons where you were asked to solve word problems or be forever lost. I can't see how that was influential on my childhood and eventual adolescent/early adult interests at ALL. 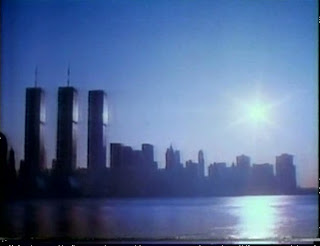 Otherworld. The early 80s were a rough time for science fiction on American TV; the Star Wars era had ended and typical hour-long action programs were shows like The A-Team or Airwolf: lots of stuff blowing up to a Mike Post soundtrack. We had V, sure, but by the time it had gone from miniseries to series, it was pretty formulaic and moribund. Which makes Otherworld all the more intriguing and weird. It was on CBS for one season, and I may have been the only person who watched it.

A family exploring the Great Pyramid (bwuh?) is transported to some kind of alternate fascist Earth with androids, churches of artificial intelligence, and, naturally, crystaltech. Eight episodes, each more bizarre in premise than the last. And 37-year-old me discovering JUST NOW that the heavy was played by none other than the future Mike Ehrmantraut. Wow.

So: eerie alien invasions, pocket puzzle dimensions and bizarre alternate Earths: these are the building blocks of my sci-fi psyche.
Posted by Michael Grasso at 9:05 AM 2 comments: