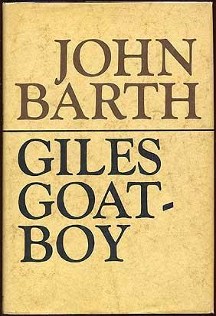 I'm a little embarrassed to admit that over the past month I've read several classics of 1960s postmodernism for only the first time: John Barth's Giles Goat-Boy,Vladimir Nabokov's Pale Fire, and Richard Hartigan's Trout Fishing in America and In Watermelon Sugar. And it's even more embarrassing to admit this because I am such a fan of the generation of writers who came after the 60s and 70s postmodernists — David Foster Wallace being foremost among them — that not having the essential vocabulary of these early postmodern literary works is turning out to fill in several blanks in my own knowledge and literary education.

I'll say this much for all these books: they are right up my alley and make me even more surprised that I'd never read them before. Both Barth and Nabokov solidly lie within the bailiwick of metafiction, both are narratively framed by questions of authorship and authority, and both deal in fictional dreamplaces that echo the concerns of the Cold War world. Brautigan's writing obviously traipses into surreal territory, but still lies in this area of unreal places and people.

To avoid having this entry end up like a high school book report where I "compare and contrast," I'll just shoot out some rapidfire impressions in bullet list form.


So about the debts owed to these writers from the writers of Generation X and younger: I've read copious amounts of DeLillo and Pynchon, but again, I've never delved back to the formative decade of metafiction and postmodernism: the 60s. Sure I've read The Crying of Lot 49 but again, that's a more picaresque Pynchon, less overtly Weird. And as I evoke Wallace in talking about the debt he owes, certainly to Barth inasmuch as Wallace tried to defy and go beyond Barth's showy metafiction, I think about the generational biases I possess with literature, and the fact that these seminal authors never even entered my frame of reference until the past month.

I'm grateful for long Cape Cod vacations and excellent used bookstores for providing me the time to read these works and with first editions of the Barth and Brautigan, respectively.
Posted by Michael Grasso at 7:43 AM No comments: