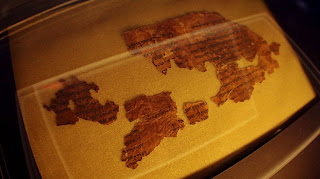 Last weekend I took a trip to Boston's Museum of Science to see their temporary exhibition on the Dead Sea Scrolls, thanks to a birthday gift from my wife. A well-curated exhibit all told, even though your eventual arrival at the scrolls after a pilgrimage through a history of ancient Judea might be considered a little anti-climactic.

Beginning with a near-360-degree multimedia display, you're sent into an entry chamber with a timeline of the region which, for some baffling reason, is shown in reverse chronological order. Maybe it's supposed to reflect being flung back in time to the original settlement of Canaan by the Israelites, but I had to be an iconoclast and view it backwards in the proper chronological order.

Then it's into a couple of chambers where the large-scale artifacts of ancient Judea are displayed, and this is where I felt the exhibit really stood out. Huge pots, scale replicas of ancient Judean living quarters with actual artifacts, altars, idols (we'll get to this in a minute), and practical items like seals and measuring scales. One small piece of recurring evidence that the idea of private proprety is an ancient one: almost all the inscriptions on these practical everyday items were statements of ownership. These artifacts also came together to tell a story about ancient Israel that is rarely accurately reflected: that pre-Captivity Israel was awfully pagan.

We were shown and told about altars, figurines, and popular cultic dedication to a panoply or gods and concepts; combine this with the pieces of architecture on display (crudely evocative of early Greek) and you get this sense that the religious differences between 800s BCE Israel and the same period in, say, Greece or Egypt are few and far between. I knew this, of course, going in but having physical evidence on hand really drove the idea home to me. It's interesting to consider that Jewish cultural identity and even monotheism itself was forged in the fire of the captivities, sackings, diasporas and cultural imperialism experienced by a people looking to differentiate themselves from their captors and conquerors.

As I said, the scrolls themselves were small, and difficult to view (even lit from beneath by a huge ring that looked like something from the bridge of the starship Enterprise). Moreover, there was not one piece of Biblical text that deviated from modern Biblical canon (unless you count the Book of Tobit, and of course some do). Granted, there were some sets of community instructions on how to behave, and these acted as an intriguing glimpse on how the Essenes actually practiced their religion. This fragmentary information about the community that buried the scrolls was far more evocative. Very few of their household objects survived the time in the desert, so the fact that these scrolls were carefully preserved gives you a very clear sense of their common priorities: forget the personal effects and save the books.
Posted by Michael Grasso at 7:35 AM No comments: