I was on Wikipedia this morning, checking the history of SI and non-SI units named after people – as you do – and I came across the name John Napier. Yes, I was faintly familiar with this name but I had no idea what he'd done. Turns out? Quite a bit worthy of a Renfusa post. 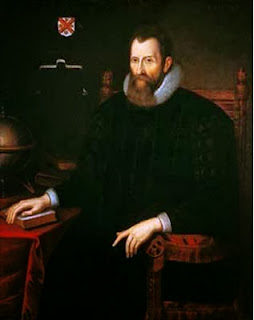 Yes, he is the inventor of logarithms, which I faintly remember from 10th grade math, but rarely if ever have occasion to use in my daily life today. But for the natural philosophers of the 17th century, logarithms were an invention on par with the computer in the post-World War II era. They enabled areas of science long dormant, like astronomy and physics, to increase the speed and accuracy of calculations, accounting for many of the great advances in that century. He was connected to our old friends Tycho and Kepler, and without his tables, Kepler would have never devised his laws of planetary motion.

More interesting to me are the affectations that seem to suggest Napier's involvement with the occult. Rumors swirled around him that he was a sorcerer; it turns out, these stories were just the suspicions of superstitious people with little knowledge of science or reasoning. For instance, he was said to have ensorcelled a flock of pigeons that was eating his grain. His neighbor, who owned the pigeons, was said to remark, "Catch them if you can," and the next day, unconscious pigeons littered both men's property. Turns out he spread wine-soaked grain for the birds to eat, and rendered them drunk. He supposedly used a black rooster to identify a criminal in his staff; turns out he devised a psychological test that would drive the innocent to touch the rooster and be marked with soot; the guilty party, fearful of bewitchment, exited the dark room with clean hands.

Like his successor Newton, he was obsessed with codes being hidden in the Bible. While Newton obsessed on the dimensions of the Temple of Solomon, Napier delved deep into that longtime inkblot test of the eschatologist, the Book of Revelations. His A Plaine Discovery, a metaphysical and historiographic analysis of St. John's Apocalypse, was certainly during his lifetime his most well-known work.

But one has to wonder about the kind of man who, when driven near the end of his life to create a calculating machine using his logarithms, elects them to be constructed of bone rods reminiscent of ancient cleromantic dice! 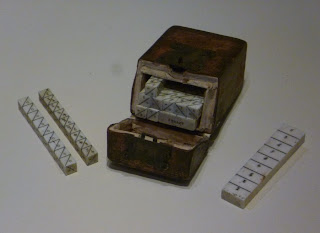 "Napier's Bones" were left as his posthumous bequest to the world, the bones and instructions on use left in a publication sent to his colleague after his death. They spread through Europe in the 17th century and became the computing device par excellence for both philosophers and merchants who needed to multiply and divide in a (relative) hurry. Such lattice multiplication tools were not new: the medieval Arabs knew about them as did Fibonacci. But Napier's bones were faster due to his logarithmic research, easier to use and, most importantly, once you knew the trick for using them, more portable than calculating tables; essentially, a bulkier version of the eventual slide rule.

But yes, they do look like Roman dice – long, four sided, and made of bone – and so there is this tendency, when looking at things from a certain angle, to dub them tools of cleromancy. Dead bones opening up vistas of knowledge never before plumbed. Mathemagics.
Posted by Michael Grasso at 8:04 AM No comments: