Dürer's Melencolia I: The Man

Qualifier up front: I am neither an art history student nor a student of psychology. So the suppositions I will make in this installment are just that: suppositions. But as someone with at least a casual knowledge of Dürer's artistic journey over his lifespan, his interests outside of art, and the way in which he navigated the political shoals and rocks of the early 16th century Holy Roman Empire, I feel like I can give at least a truncated psycho-history of Dürer.

Let's begin with the most notable observation from his early life: Dürer was born at least somewhat an outsider. His father, a skilled craftsman (in goldsmithing), came from modern-day Hungary and as we noted in the previous installment, Dürer's family name was originally Ajtósi, changed first to Türer (the German translation of "doormaker") and then phonetically to Dürer. Whether or not Dürer's background as a "first-generation immigrant" (if such a term can be used anachronistically) had any impact on his later art, I can't say. What I can say is that almost all of Dürer's biographers agree he was privileged to grow up in the burgeoning "middle class" (again, another likely anachronism) among some of the much talented craftspeople in Europe near the turn of the 15th/16th centuries.

Dürer didn't differ from most artisans of the time: he apprenticed, he had his wanderjahren (which included a stint in Italy at the outbreak of the revolution in art there), and he settled in Nuremberg where he lived for most of the rest of his life. Stability, patronage, experience: these are the factors that enabled Dürer to produce his masterworks.

What do we see of Dürer in his art? Precision, yes, to be certain. A certain horror vacui that today we might associate with outsider artists? Perhaps that's just me. A devotion to the ideas of twin ideas of the liberal arts and mystical inspiration? Looking at his St. Jerome in the context of Melencolia I, and indeed the occult construction of the melancholia imaginativa previously investigated, how could anyone think otherwise? But there are some other aspects to Dürer's personality that I believe can be found in his choices of subjects.

Portraiture was unusual enough in this very early Renaissance era. Self-portraiture was even rarer. Occasionally a fresco artist might insert himself as one figure of many in a crowd scene, but Dürer's gaze gravitated towards himself first, and this made him unique in this period. Later in the 16th century and beyond, the self-portrait would become an accepted, normal mode of painting (notably, amongst women artists), but in Dürer's time, it was a statement of purpose, a statement of ego.

Because Dürer did not come to making real, permanent works featuring himself later in life; he'd done it since adolescence. Certainly, the drawings he made at 13 may have likely been for practice, but his great self-portraits in paint occurred throughout his 20s, when he was just beginning his career. An audacious statement.

More audacious? His Self-Portrait at Age 28, in which he dresses and poses like a Christ.1 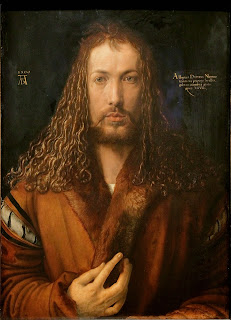 As was his trademark, his AD monogram, which adorned most of his prints. Remember that prints were certainly for mass consumption in this age, and so began the era of the credited artist.2 Dürer had to be a marketer, a self-promoter. But still, I believe this strong sense of ego was one of the most basic elements to his personality, and it dovetailed well with the development of the printed image and word.3

This leads nicely into I think the other very salient aspect of Dürer's personality: his profound neophilia. By now means was Dürer mired in the past in either his art of his thought: he was the early prototype Renaissance man: plumbing the ancients for the ideas that mattered and re-presenting them in a "modern" context. Certainly his thoughts on architecture and art broke ground, but spiritually and religiously, we've already seen his attraction to the occult, and in the early years of Martin Luther, Dürer positively idolized the man. Keep in mind, this was before Protestantism as a movement and Luther was simply an unorthodox reformer; once Luther broke with the Church, Dürer would brook no further discussion. But he remained friendly to Reform ideas up until his death, which in the context of everything else, makes a lot of sense.

So where do we end up with these traits? We see a man with a strong ego, a desire for the new, and a crowded, full mind, forever voyaging. Was Dürer melancholic as we would consider it today (either unipolarly or bipolarly depressed)? The connection between genius/creativity and mental illness is well-trod ground I don't wish to debate here, but it is interesting to note that no one ever made explicit observations of Dürer being depressed, simply energetic and endlessly creative. Surely, he was said to have experienced "depressive fits" when his father died, but this is reasonably to be expected. Dürer definitely tried to control his self-image, so it makes sense that he would release only the manic side of his bipolarity, if indeed he suffered from it.

One wishes to argue that melancholy interested Dürer for the reasons we cited in Agrippa: he saw in its imaginative form an explanation for his skill with hands and mind. In the last installment of this series, I'm going to examine this idea of mental illness, depression, creativity, and ego more carefully in a personal context. For now, I wish to leave the question, "Was Dürer himself melancholic?" unanswered, like so many of the mysteries in his masterworks.

Next week we'll look at the art, mathematics, and science – including the occult science – of Melencolia I.

1 For years, I thought this was the work featured in both of George Lucas's THX-1138 films (student version and theatrical release), as the Electronic Confessional/Jesus/Citizen 0000, but it turns out it was Hans Memling's Christ Giving His Blessing. That confusion in and of itself says a lot about Dürer's self-portraiture.

2 Being a medievalist by education, the proliferation of named authors, artists, and musicians always was to me one of the signal occurrences to identify the change from medieval to Renaissance mindsets, whatever that might mean. I've come around on this as being somewhat reductive in recent years as I delve more into the Renaissance/early modern period.

3 In most of the books Dürer authored, his monogram appears on the frontispiece and takes up nearly half the page.
Posted by Michael Grasso at 7:48 AM