- a friend and me, on Melencolia I

"It's grey and has a sad dog and a withered baby and an angry dude and symbolism and is [your] version of puppies and rainbows."1

- my wife, on Melencolia I

Last year, I did a series of posts around Christmas on the Weirdness of Christmas. It was pretty well-received, especially the post on the Yule Lads, which is apparently getting a lot of attention these days as we enter another holiday season.

Most importantly, last year's Weirdmas series kept me honest. It kept me writing. So I was thinking that I needed another series this year; maybe not 12 days of fun, as real life continues to intrude. But something I could write about over the holiday season in a serial format. And then it hit me.

My long-promised series of posts on Albrecht Dürer's Melencolia I. 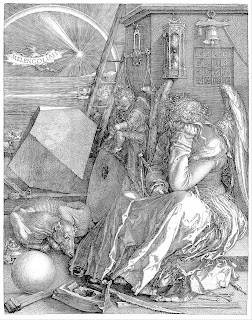 I don't want to spoil too much of what I'd like to write about this magnificent, mysterious print in this introductory post. But what I will tease is the fact that this work is absolutely seasonally-appropriate, especially for me personally.

Its deeper personal meaning for me, too, will need to wait until the proper time. All I will say at this moment is that Melencolia I is an important artistic vision to me on many levels, one I did not discover until relatively late in life, and one which I literally look at every day (it is both my iPad wallpaper and my Facebook homepage image).

During this series I'll also talk a lot about Melencolia I's occult symbolism, about Dürer's life and influences, about the reception of Melencolia I in the centuries since it appeared on the scene. But mostly I want someone out there to discover it and love it as much as I do.

1 This conveniently ignores that Melencolia I actually has a dog and a rainbow in it! Hmph.
Posted by Michael Grasso at 7:23 AM