Delving into the Trove: The Electronic Games of the Late '70s/Early '80s

Last weekend I attended PAX East, a primarily video game-oriented convention here in Boston. I'm not much of a video gamer; as I've probably hinted, tabletop games are more my thing. I think in the modern taxonomy of gamers I fall squarely in the "casual" camp. So as sometimes happens as my friends and I are hanging around the convention hall, waiting for the next board game to break out, conversation went to the age difference between us and many of the attendees at the convention, which is a topic that is sure to light a fire under me. And in the course of this conversation, a flood of deeply-buried memories came out about the primitive electronic games that flooded the market in the years just prior to and during the big Atari boom (and bust) of the early '80s. 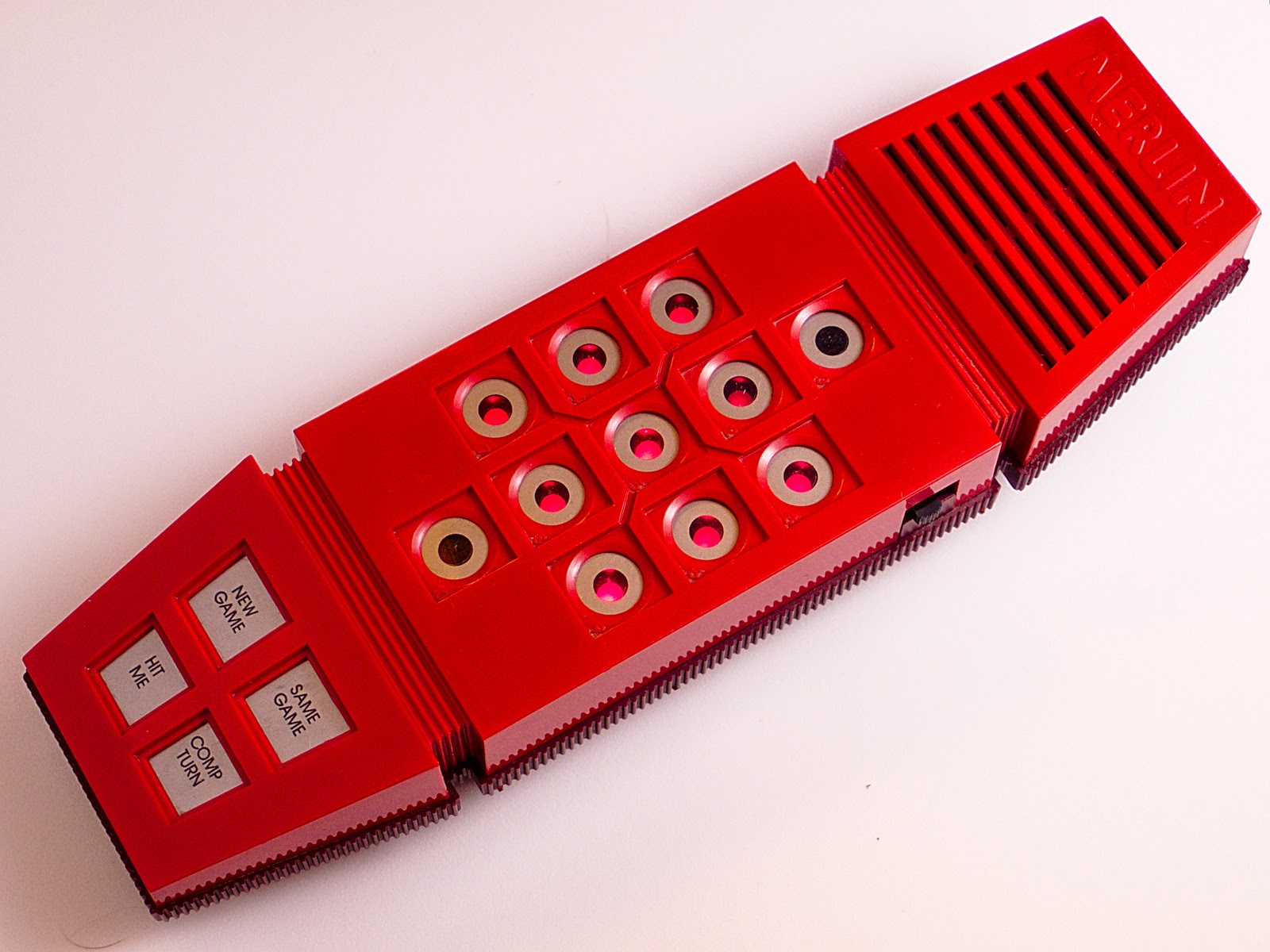 The first one that came to mind was Merlin, for some reason, maybe because of its distinctive design. Looks kind of like a phone, right? I can tell you that in 1980, around the time I got mine, not many people had phones that looked like this (Merlin actually came out in 1978). Visually I can remember it vividly, but the actual games you could play on a device with 11 game buttons (other than tic-tac-toe) escaped me. Apparently there were six games, but at the age of 5 I think for me it ended up being a glorified tic-tac-toe machine, really. 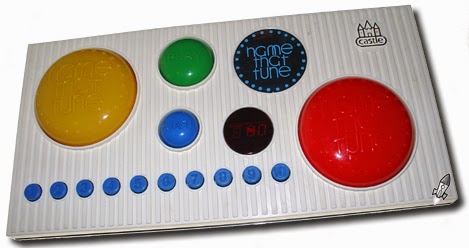 Then I thought of Name That Tune, based on the very popular 1970s game show on TV. Now, let me be completely honest; I never got this thing to work right. Like many of these handheld electronic games of the period, if you lost the instruction booklet, you were right out of luck. Remember, there was no internet to download instruction booklets from. And Name That Tune was particular enigmatic, as I remember. Fun fact for the other MSTies out there, this used to be the "Movie Sign" button during the KTMA episodes and when I first recognized it on a blurry VHS, my heart leapt in delight. Not surprising because I know for a 6- or 7-year-old, those big colorful buttons were just begged to be smashed. 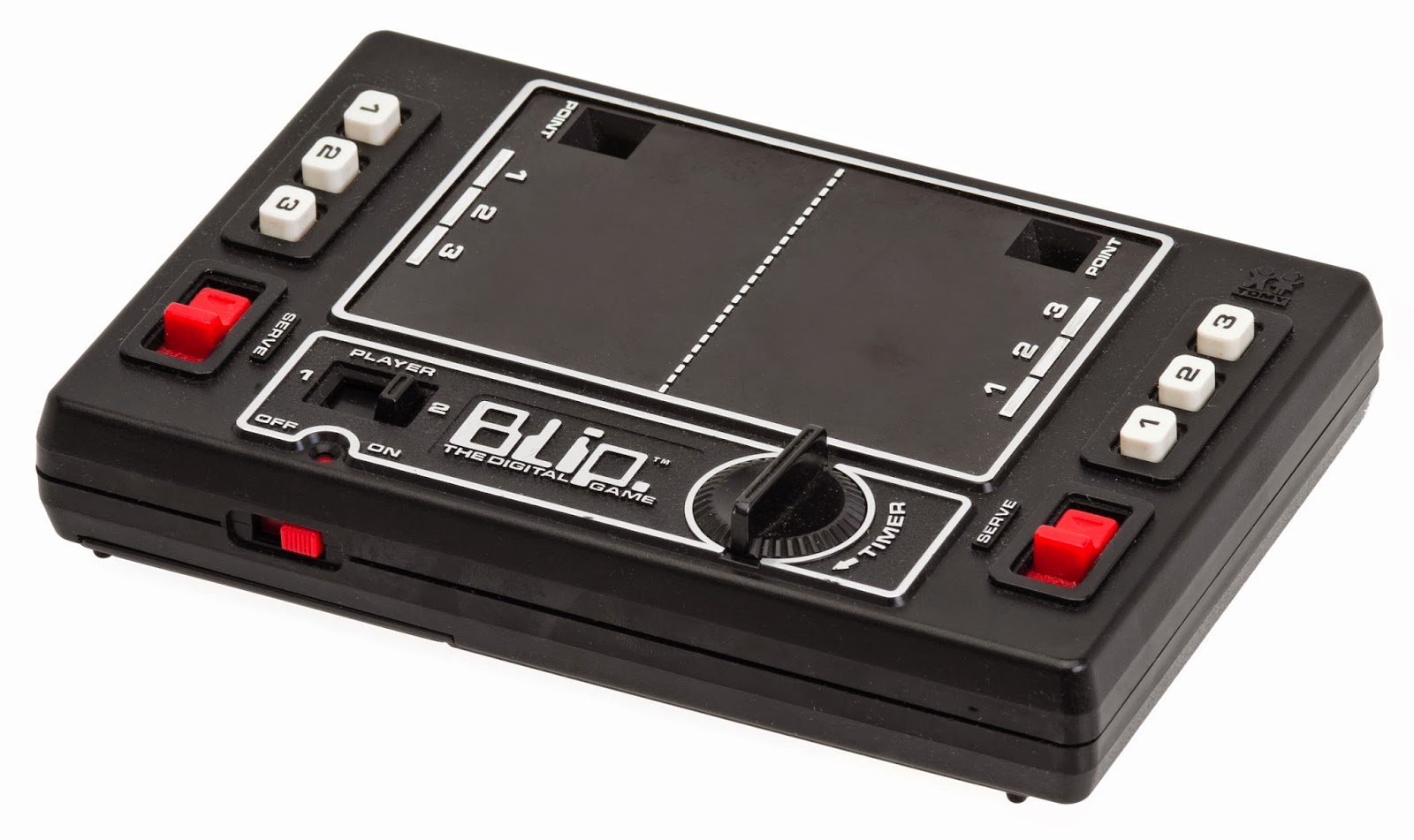 Blip. BLIP. This is the one I couldn't remember during the conversation at PAX and struggled to discover the name for. (It didn't help that I had gotten it confused with the classic Mattel Electronic Football game. No, not electric football, which I also had and which was even more analog and possibly even more sonically annoying than Blip). I had to explain it to my Generation-Y companion (our esteemed Euergetas) as such: "It was an ostensibly electronic game that had an actual moving light inside it, and you had to wind it up! It buzzed so loudly while you played it that you'd think you were holding a tiny buzzsaw!" And lo, my faded memories were spot on. What a piece of garbage. I played it incessantly. Probably because for an only child, it had a 1-player mode that made those years less lonely. 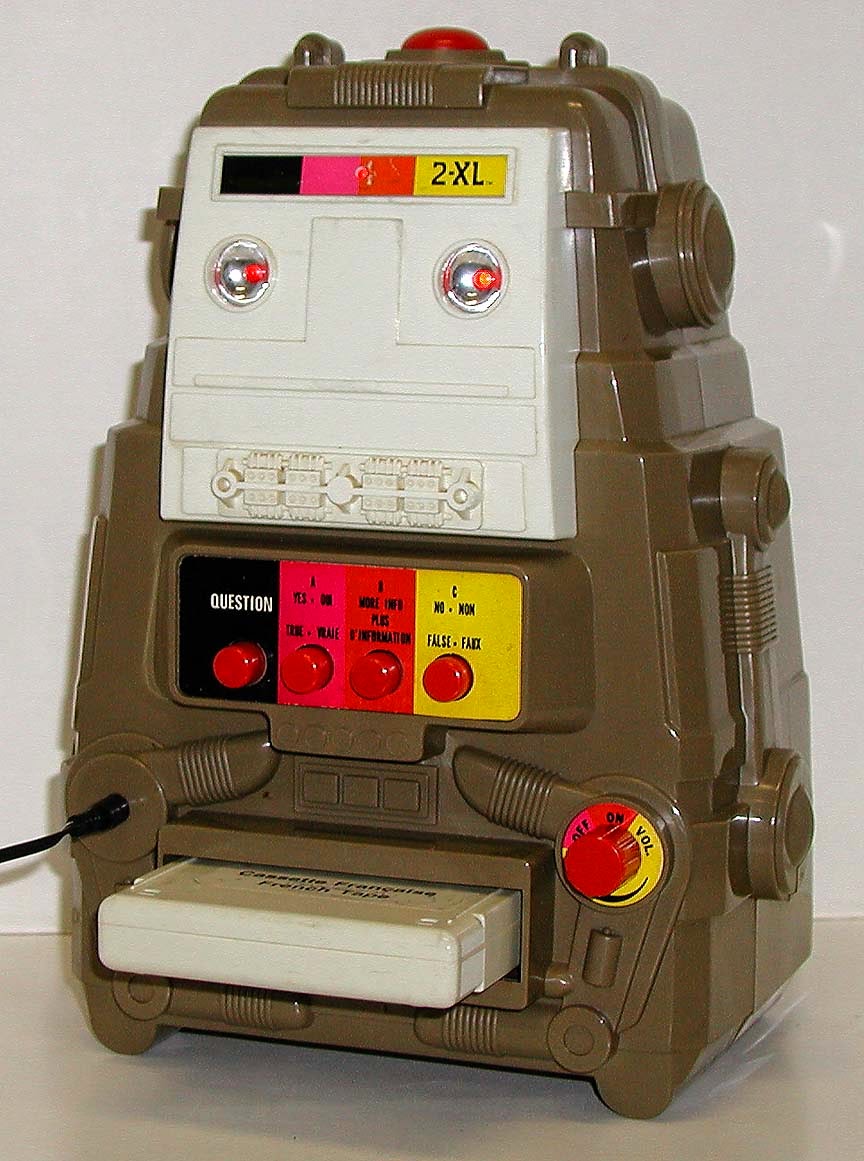 Finally, there is 2-XL. We had a little controversy over this one; my Gen-Y companion also remembered a game tape-playing robot, which we quickly identified thanks to the internet as Alphie. Alphie used cassette tapes, okay, fine, that's nice and retro, sure. But 2XL used 8-tracks. 8-track tapes. And yes, he asked you questions and you clicked on the huge chunky buttons and answered them and he had a demonic giggle and yes, he's not a very welcoming-looking sort of toy but back then we didn't care about that. We just wanted a box that could accommodate a huge 8-track tape and play them back in a way that approximated an interactive AI experience. 2-XL was apparently re-released in the '90s to accommodate cassette tapes (and to be made to look friendlier) but that to me is just a bastardization of the true 2-XL, its intimidating unfriendly shell and all.
Posted by Michael Grasso at 7:38 AM