It's been about a year since we've provided you with new content, but that is about to change.

First, an apologia for our hiatus. Many changes have occurred in my life in the past 12 months, but the most notable has been my abandonment of my prior career in corporate education and my full shift into a career in museums. More about this will be said in the weeks and months to come, including later in this very entry. There is also the matter of a little pop culture/history podcast I have been perpetrating with our esteemed Mercator Lucis that has taken up most of my non-life-change-related discretionary time.

Second, my career in museums comes with a necessary education in museums, which I have been pursuing for the past 18 months or so through the Harvard Extension School. I've applied to the Museum Studies Master's program and should find out about my admission in a month or two. I'm currently in my fourth Museum Studies course, The Role of Museums in History, which is a course I've been eagerly anticipating taking the past year and a half.

I'm writing today because this week we do happen to be covering the museum or its predecessors in the medieval and Renaissance periods in Europe, and our reading for this evening's session, from The Origins of Museums: The Cabinet of Curiosities in Sixteenth and Seventeenth-century Europe, edited by Oliver Impey and Arthur MacGregor, featured a great quote attributed to Renfusa's spiritual patron Francis Bacon.

In the Gesta Grayorum, essentially a eclectic set of orations, playlets, songs, and fancies performed and recorded over the course of Christmas season revels among law students at Gray's Inn, London, an author believed to be Bacon (who was a lecturer at Gray's Inn) talks about an ideal edifice for the study of philosophy (these scans of a 1914 reprint of the 1688 first publishing of Gesta Grayorum courtesy archive.org): 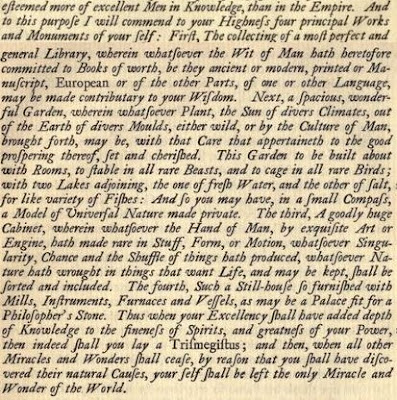 Leaving aside how our supposed Bacon seems to be, entirely fittingly in my opinion, playing a solitaire 1590s version of the computer game Civilization here (if you don't believe me, read the next section starting on page 35, titled "The Third Councellor advising Eternizement and Fame, by Buildings and Foundations"*, and its list of important buildings for a civilization to have)... doesn't this look an awful lot like an early draft of the ideal society of Bensalem from The New Atlantis, just on a smaller scale? It's just a hunch of mine, but it shows that Bacon (if this is indeed Bacon, and please, let's not get into what the Gesta Grayorum says about the authorship of Shakespeare's plays) was thinking about these neatly universal demonstrations of human knowledge and scientific research early in his life and career. Pretty good stuff to kick off both my semester and a rebirth of this blog.

* Two notes here: 1) the multiple "councellors" which Bacon embodies here do remind me of Civilization's various pesky Advisors, thus solidifying my tenuous Sid Meier/Francis Bacon conspiracy theory and 2) I endeavor in the next year to use the word "Eternizement" every opportunity I can.
Posted by Michael Grasso at 1:40 PM