Note: this topic came in second place on our recent poll.

A few years ago, at my old, unlamented job, I had occasion to go up to the IT department for a new security key and saw one of the techies up there had a glorious Nixie clock. I then proceeded to post about my love for this particular kind of actually-quite-lamented retrotech and all the places it appeared in formative science fiction works of my youth.

Well, I turned 40 last month, and in what I feel is a tribute to the hoary distant years of my birth, the 1970s, my wife proceeded to buy for me... tada, a Nixie clock.

It's a beaut. As I mentioned in my previous Nixie entry, I am mechanically declined, to quote a classic Far Side comic. I was never going to put together a clock of my own that involved molten hot metal. So my wife very gladly obtained me an already-assembled Nixie kit from Ramsay Electronics.

It's definitely got some modern touches, most notably the buried multicolored LED lights that allow you to do cool things like color-code every hour of the day through the spectrum, if you are so inclined (*coff coff*, 6 am is red, 10 am is orange, and so forth). But the really important part of this clock, the Nixie tubes themselves, are authentic and scream indie Soviet cred right down to their wires: 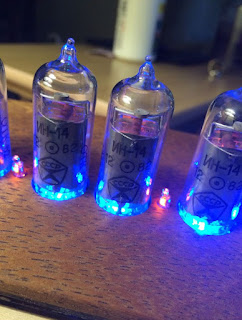 Doesn't seeing that CCCP legend just get you wanting to sing the Soviet national anthem and play some CHEXX? The IN-14 tube seen here on my clock is probably from the late '80s pre-Soviet collapse surplus that has kept modern collectors in clover the past few years of the Nixie clock craze.

This clock is the ultimate party conversation piece. We had a birthday party shortly after I got this thing and we had about a dozen people gathered around staring at it like some kind of dead-tech hearth. People were hypnotized by the stacked cathodes and how the numbers change (the model I have is programmed to cycle through the circuit when going from a 9 to a 0).

At some point in the next few weeks I'm going to post about another great gift I got this summer, very different from the clock but no less a conversation piece, but for now, here is my Nixie clock. There are many like it these days, but this one is mine.
Posted by Michael Grasso at 9:05 AM