Five things I learned from The Marvelous Clouds: Toward an Philosophy of Elemental Media by John Durham Peters 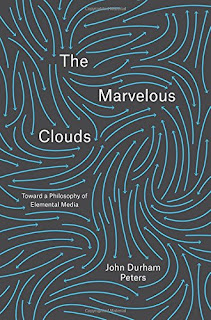 1. This isn't the first book I've reviewed with an elemental theme; Electric Eden, about the 1960s and 1970s British folk revival also used the classical elements as an organizing principle. In Peters' case in The Marvelous Clouds, though, the element represents a medium and a study of the medium itself is the topic at hand. And the topics that Peters explores are a delightful, thrilling panoply of subjects: the modern reader will have a fairly one-dimensional view of the concept of media, but Peters starts at the root: a medium is something between two points. And from that basic supposition, he spins out a set of examinations of water, fire, air, and earth (well, really text) as media and what they tell us about the human condition. Peters recognizes a heavy debt to Marshall McLuhan and the other media theorists of the 1960s, and Peters definitely has that free-wheeling, free-associating feel of late-career McLuhan. One feels that Peters saying, "One reads McLuhan for sparks, not scholarship" is almost an apologia, but there's plenty of strong scholarship in The Marvelous Clouds.

2. I was first attracted to the book because of its Water chapter, which looks at the intelligence of cetaceans and how they deal with being an intelligence in the medium of the seas. It's an old saw, going back to the moment where humanity realized that whales and dolphins could join humanity as an intelligent species on Earth: if there was an alien species right on the world you call home, separated from you by a vast gulf, how would you recognize them? I suppose it's to humanity's credit that we eventually managed to recognize that the search for extra-terrestrial intelligence begins at home. It's no coincidence that John C. Lilly, probably the 20th century's most famous cetacean researcher, was part of SETI, and that Lilly dubbed these early ET researchers "the Order of the Dolphin." Peters looks at the history of man's interaction with cetaceans, right back to the ancient Greeks, who venerated them as holy to Apollo. Humanity's recognition of the dolphin's playfulness and sexual licentiousness (again, by human standards) is woven into these ancient myth-echoes. The deep dive (oops, pun) into what the unique physiology and circumstances of cetacean life has meant for the societies these beings have created is the kind of discussion that will dislodge your brain from an anthropocentric point of view and jostle it a little, which is a refreshing and honestly a little unsettling an experience.

3. The Fire chapter, though, was even more of a mindblower. The idea that the discovery of fire by humans began a relationship of humans to fire as a medium... it makes sense, doesn't it? In the last several thousand years of humanity's harnessing of captured solar energy in the form of fuels like wood, coal, and eventually oil, we have used our fire to write across the Earth in destructive ways. One intriguing theory Peters presents is that we have lost our respect for the power of fire by successively, over the years since the Industrial Revolution, hiding it and its immediate visual impact further and further away from our senses, first as steam engines, then as internal combustion engines, and finally in the 20th century world as electricity, in each iteration further and further from the hypnotic flame and smoke of the actual fire behind it all. The fire used to be a tangible, visible thing, at the center of a home, as a hearth. Now it is Vestal fire, according to Peters's source Stephen Pyne, in the secret occult meaning of the word. Also there is a litany of ways in which fire allowed humans to become literate; the caves of prehistoric cave paintings could only be seen by torchlight, the fact that ash has long been an ingredient in ink (and even is buried in the etymology of the word in English; "ink" comes from the same Greek root as "encaustic" and "holocaust"), and as far as the fire and light of visual media like heliographs, telegraphs, film, television, and modern computer screens.

4. The chapters on Sky reiterate a lot of things I already knew about how humans have used another form of media, the night sky, throughout history to create patterns, measurements of time, calendars. But even in this chapter I found a lot of thought-provoking implications. Peters intimates that the priesthoods which emerged in ancient societies go hand-in-hand with the apophenic tendencies of those who gazed into the skies. Making patterns out of random dots leads inexorably to making up stories and myths about the world around you. It's a powerful suggestion as to the roots of religion and how it relates to politics and conspiracy (as I may have briefly mentioned in Monday's post, it seems that the occult and espionage always seem to move in a path of collision). I honestly would have appreciated more material on the regimentation of time and how it's changed throughout history depending on our technology and culture, but there is a great digression about how much weather forecasting changed our world and is almost entirely indebted to the invention of the telegraph, which allowed for weather to be visualized and tracked across time and space in the analysis-, time-, and space-obsessed 19th century. Also another idle thought bubbles up about the use of human breath in the calls to prayer of Judaism (the shofar) and Islam (the voice) versus the clinical distance and technological ringing of bells in Christianity. Oh, also how clouds in 19th century painting no longer hold angels or God, they're just... clouds and that means that God is dying in the West. Sorry I keep zipping from idea to idea but again, the book is just filled with brief digressions like this that act like Zen koans and just slap you out of your worldview.

5. Peters finishes with a look at the history of text, books, the Internet, and eventually Google's outsized role in our modern media-consuming lives. Peters comes not to bury Google but to almost deify it; its role as the nearly-single arbiter of the world's library echoes other efforts throughout history to categorize and organize learning, but works on a level more complete and vast and universal than either the Library of Alexandria or Jorge Luis Borges could ever imagine. Merging with this feared omniscience is the idea that Google's algorithms are a simulation of the computer scientist's long-held dream/nightmare: the spectre of artificial intelligence. Google's ability to understand context as well as index and retrieve is the key. When you are finished with The Marvelous Clouds, you're going to come out looking at the things around you in a completely new and different way, and that is probably the strongest endorsement I can give it.
Posted by Michael Grasso at 10:50 AM