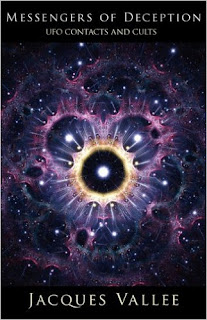 1. Jacques Vallée, famed Ufologist (and model for Francois Truffaut's character in Close Encounters of the Third Kind) spent most of the latter half of the 1970s researching human organizations who had fallen under the spell of saucers from outer space. We would today call them '70s UFO cults. But Vallée, himself a believer in UFOs (though not perhaps necessarily the extraterrestrial hypothesis) from the time of his own UFO experience in his adolescence, very cannily spends the 250-plus pages of Messengers of Deception averring that perhaps the UFO cults are not really out there because of sightings of weird lights in the sky, but instead because of the social and cultural dislocation that occurred in the aftermath of the upheavals of the 1960s in the West. This, I think, is a very incisive piece of observation and it's inevitable that the majority of Messengers of Deception takes this tack, even when investigating what seem like very homely mysteries like one-person UFO cults and cattle mutilations.

2. Moreover, Vallée recognizes that the governmental and military authorities, who often themselves have been baffled by the UFO phenomenon, are actively using organizations like UFO cults (as well as UFO support groups, individual UFO researchers, and other occult groups) to muddy the waters when it comes to investigations into UFOs. Vallée cites the sincerity of these believers which turns them into "useful idiots" for the machinations of those in the intelligence community. Vallée's contact within the U.S. intelligence services, a "Major Murphy" (most of the promiment individuals Vallée consults with in the book are pseudonymous, and they include scientists, researchers, and prominent academics who have had UFO experiences), says that UFO cults and organizations in the West are riddled with moles and agents for various Western governments. And the converse is true on the other side of the Iron Curtain; that the Soviets in the late '70s are concerned about UFO stories spreading within their populace as evidence of provocateurs "flirting with superstitions and religious impulses indirectly manipulated by the Pentagon." Vallée is again very canny to see no discernible difference between the higher powers of UFOs and the higher powers that espio-occult groups have been seeking to contact "since the days of Dr. John Dee and Jacques Casanova." The political, military, intelligence, and scientific connections of individuals like Aleister Crowley, Guy Ballard/William Dudley Pelley, Jack Parsons and of course L. Ron Hubbard are examined. Espionage and the occult, both seen as worlds full of secrets not vouchsafed to the uninitiated, go hand and hand and always have.

3. The mid-to-late '70s were also the beginning of the cattle mutilation phenomenon. The origins of this phenomenon in the Western part of the United States bolsters Vallée's government provocateur theory; the ranchers who were the victims of this outbreak of unexplained cattle deaths and mutilations were (and still are) politically quite suspicious of government and specifically world government. There is a reason the cattle mutilation phenomenon was subsequently subsumed in the 1990s "UN black helicopter" conspiracy theory. The isolation, both geographically, socially, and politically, of Western ranchers is a fertile ground for starting conspiracy theories. Moreover, hitting the ranchers in their pocketbooks with a horrific, occult-tinged offensive of cattle mutilation, is a solid psy-op the type of which would not be out of place in Vietnam a few years earlier. Very interestingly, Vallée cites a report by the U.S. attorney in Minneapolis about "Intelligence information regarding occult activities throughout the United States" that blames animal (and human!) mutilations on "motorcycle clubs" and "Satanic cults," including the testimony of a ex-con who swore that a Hell's Angel in prison told him about a secret organization known as "the Occult" who were behind a wave of human sacrifice and were going to assassinate liberal politicians and entertainers. I will leave it to the reader to connect the dots between this Minnesota-based Satanic panic and the later, more famous one in the 1980s. 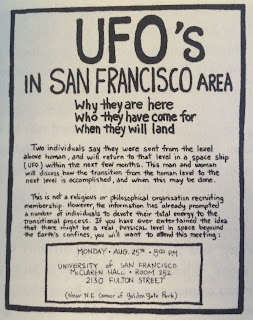 4. But let's get to the real juicy part of this book: Vallée's look at the myriad lone kooks and UFO cults of the period. It's impossible not to immediately be taken by Vallée's visit with HIM, the cult also known as Human Individual Metamorphosis. HIM was thick on the ground of university towns in the mid-'70s, recruiting young impressionable members to their group. Vallée's descriptions of "The Two" who led the cult and their constant references to a "level above human" will be chillingly familiar to those of you out there who, like me, in the early days of the web, pored through the Heaven's Gate cult web site in the aftermath of their mass suicide in 1997. While to many of us in 1997, the Heaven's Gate suicide seemingly came out of nowhere, in the mid-to-late-'70s, Marshall Applewhite and Bonnie Nettles' group was apparently infamous enough for its recruitment tactics that Vallée could say, "The group led by 'the Two' has now become so notorious that I need not spend more time with them; many articles have been published about them, revealing much about their intentions and methods." In France, Vallée meets the Order of Melchizedek, a group with a much more old-school occult tinge to its beliefs and praxis. Technocrats and millionaires like "Mr. T" and "Mr. X" in California talk about how alien contact could mean technological advances and freedom from the petroleum industry and mainstream scientists; and of course the Raelians, who exist even today and have been immortalized in pop culture and literature in their 40-plus year history, offer free love and immortality through cloning thanks to the "Elohim."

5. Vallée's thesis at the end of the book embraces the earth-bound reason for the explosion of UFO cults that I cited in 1 and 2 above. His "six social consequences" of UFO enthusiasm include the fact that UFO belief creates distrust in scientific authority, takes authority for humanity out of the hands of humanity in general (by theories like the "ancient astronaut" theory), promotes the concept of one-world government and world peace in the Manichean era of the Cold War, replaces conservative moribund earth-bound mainstream religions, and at the same time primes the credulous for spiritual answers to materialistic questions, and finally edges human beings toward essentialist, racist, and even totalitarian systems by idealizing the Saucer People as an elevated, superior race. Quite a mish-mash of social consequences, and a few of them definitely seem to contradict each other implicitly (although all seem solidly on the side of taking free will out of the hands of followers), but the idea of the 1970s being a liminal time where the opportunity for radical changes in human political and spiritual organization was wide-open... that's something I can get behind.

This is a fantastic book; a time capsule in some ways, but also the best kind of social observation, one with immediate application to any time period it's read in.
Posted by Michael Grasso at 9:00 AM