Five things I learned from reading Joshua Cutchin's A Trojan Feast: The Food and Drink Offerings of Aliens, Faeries, and Sasquatch 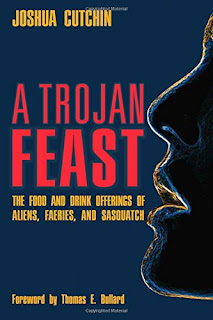 1. Y'all already know that I like faeries. Y'all also know that I love UFOs. I'm fairly agnostic on sasquatches; I leave that side of the Weirdness street to our esteemed Depraedator. So when I heard tell of this book and was provided with a copy from that very same member of our masthead (thanks Chris), I was pretty much wholly onboard. Joshua Cutchin's purpose in writing this book is to look at reports of interactions with otherworldly beings that revolve around food. You have to already be onboard with Jacques Vallée's ultraterrestrial hypothesis from Passport to Magonia; there's very little daylight between faeries and aliens in this book from the get-go. His inclusion of sasquatches/Yetis/Bigfoots/wild hairy men seems to be the fly in the ointment (this play on words will be very funny later) until you start reading about all the Bigfoot abductees who have been fed by the creature, and you begin to see the common threads linking all these stories. Cutchin owes a lot to both Vallée and to Charles Fort; his work is solidly in the "collect a bunch of folkloric evidence and connect the dots" vein. While Fort himself rarely created theories to link all the weird happenings he collected and rather just took on flights of possibility on what our nature is on Earth (dumping ground? zoo? specimens on a cosmic microscope slide?), Cutchin does link his evidence to an overarching theory, which I will cover in number 5 below.

2. The uncanny nature of an otherworldly visitation, whether faerie or UFO, usually takes on a dream-like quality both during and afterwards. But the sheer number of stories where a human is invited to partake of some strange foodstuff while in the care of the ultraterrestrials (my blanket term for these beings so as to avoid typing "faerie/alien/sasquatch" over and over) is striking. Most people at least passing familiar with faerie lore will remember the dictate that a human should eat no food while in their company, no matter how much the beings insist on accepting faerie "hospitality." Whether this is due to the faeries not being able to make human food and instead enchant leaves or worms or even frogs with a "glamor," or whether their food is better rejected because it will cause a metamorphosis within the human or anchor them to the faerie lands, faerie food is never a simple case of nourishment. It is always something that it is not. At the same time, rejecting faerie hospitality will sometimes incur their wrath. So you're pretty much screwed either way. The UFOs that have appeared since 1947 have had their own share of food-offering tales, but in these cases more often the food is a liquid, or an injection, or even a pill, and it is most often force-fed to the abductee, fitting in neatly with the high-tech abduction paradigm of most UFO encounters of the third kind. Sasquatches (here we're speaking of a variety of North American native myths involving wild, hairy, man-like beasts), while lacking in modern recorded encounters, do have some common myth threads of "wild spirits offering food to a lone wanderer" usually in the form of roots or salmon that ends up being a glamor covering tree bark.

3. Cutchin sorts his stories by the type of food offered by the ultraterrestrial. Mixing stories of alien, faerie, and sasquatch lore, he sees that most stories involve ingestion of a liquid. The liquid, while initially appearing sweet in scent and taste, soon becomes bitter. Most "missing time" or amnesiac encounters, especially with UFOs, seem to involve this liquid knocking out the abductee and robbing them of their memories. While the liquids often seem to be "space-age" elixirs in color and flavor, sometimes abductees are offered a liquid that appears to be milk. Even members of the I AM Activity believed that the Comte de Saint-Germain offered them "a peculiar creamy fluid" on the slopes of Mount Shasta. Fruits and fruit juices also occur in alien and faerie encounters, with the metaphor of seeds holding their symbolic, quasi-Biblical potency in spiritually-themed UFO interactions. Milks, creamy fluids, and fruits all hold a potent sexual symbolism as well, which Cutchin discusses (alien and faerie encounters very often have a sexual dimension to them, not always consensually, which dovetails with the forcefeeding-and-amnesia motif). Sexual encounters with aliens also often feature the aliens smearing an ointment on the abductee to prepare them; fairy and sasquatch encounters also feature ointments, more often smeared on the eyes. Bread, as the staff of life, also appears frequently, especially in the Russian post-Soviet period (the early 1990s), where memories of older famine awoke cultural echoes of Baba Yaga and her associations with both feast and famine. Cutchin finds the specific foodstuffs that are most frequently seen in ultraterrestrial encounters interesting, because they seem to correspond perfectly to the Sattvic diet in Hinduism: dairy, fruits, and grains. The Sattvic diet is the highest and most refined of the three dietary gunas. Cutchin asks if the clairvoyant and sensitive nature of abductees can be attributed to their subsequent adoption of a Sattvic diet.

4. Diet providing the entry into a heightened state of awareness also evokes the entheogenic impulse in human spiritual traditions. It's no surprise that DMT trips have produced the same experience as alien contact; shamans globally have used fly agaric and ayahuasca to reach out to alien spirits. Ayahuasca encounters have produced visions in some experiencers that replicate the food offering motif seen in all the above stories. The purgative quality of the ayahuasca experience (literally; the ayahuasca beverage frequently acts as an emetic) and its bitter taste (sweet turns to bitter, just like entity liquids) is part of the ritual; it clears the stomach, heart, and soul. Ayahuasca ritualists often prescribe a light, Sattvic-style diet prior to the ingestion of the entheogen to make for an easier transition. Cutchin asks the question: are these entities products of the experience or one and the same with the liquids they offer? Is this a communion in the truest sense of the word? A South African healer spoke in an interview in the late '90s about having consumed the flesh of a Grey alien; this flesh produced an Ebola-like reaction with hemorrhaging and fits of uncontrollable laughter that lasted for days.

5. Cutchin concludes his study with the essentialness of food to the human experience; it is indeed one of the universal human experiences to eat and drink. In addition, food symbolism and the sense of taste provides strong connections to memory; given the ultraterrestrials' ability to manipulate memory, it makes sense they would use food and eating as "screen memories." Cutchin tells the story of a purported encounter where the human witnesses, a family, were led to believe they were eating in an ordinary diner but after many years, this memory fell away revealing memories of diminutive beings in silvery uniforms and the diner became a UFO. After this, Cutchin prepares his hypothesis, saying "there are no conclusions to be made [with respect to entity food encounters], only connections":


Extraterrestrial, spiritual, or interdimensional intelligences which exist in other realms can interact with human beings by altering chemical compounds (e.g. DMT) in that brain, leading to altered states of consciousness. In order to facilitate these changes in neural chemistry, these entities often draw upon the human race's rich symbolism of food and drink, offering "food mirages" which elicit a change in consciousness in the observer. These simulacra are directly projected into the mind, an extension of the entity itself ("eating the god"), and are used to initiate, strengthen, sustain, or – most commonly – end an encounter (Cutchin 183-4).

The idea of the human brain's ability to produce microscopic amounts of DMT internally producing alien encounters is a popular one; it ties in with instances of sleep paralysis and memory scrambling that seem to be common to alien encounters.
Posted by Michael Grasso at 9:00 AM