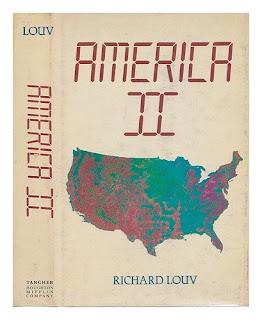 1. I found this beauty at Cellar Stories Books in Providence while I was down there in August for NecronomiCon; this book has nothing to do with H.P. Lovecraft but everything to do with stuff I groove on: retrotech and historical accounts of the social impact of technology. I mean, just look at that cover. America II, published in 1983, is a look at the newly emerging living situations of Americans in the early 1980s as new technologies (telecommuting in its earliest forms) and housing arrangements (condos, neighborhood associations) came about in the early Reagan years. Richard Louv started this book while reporting for a San Diego newspaper; if there is any city that exemplifies his putative America II, it is the new gleaming Sun Belt Reagan-era military mecca of San Diego. America II is novel, full of previously-unseen and untried ways of doing things. Well then, what, you may ask, is America I? Louv tells us:


America I is made up of all those steel workers and middle managers so bewildered by a society that, more each day, does not seem to need them. America I is once-vibrant big cities, big labor unions, auto workers, public swimming pools, railroads, New Deal politics, and the freestanding single-family home... America I is all those people left behind outside the gates (Louv xi-xii).

Those of you who have been listening to my podcast will note these are the hobby horses that our esteemed Mercator Lucis and I have been working through in our look at a sitcom from this crucial Carter-Reagan period. While there is a powerful sense of nostalgia in this and other statements of Louv's for America I, he notes the irony that many of the Americans who are pioneering America II are just as nostalgic for the peace and harmony and concord of their own homogenous upbringings, a powerful need for safety in the aftermath of the upheaval of the 1960s, which again is a topic I've been super interested in lately.

2. "If Americanism is a religion, then nostalgia is its liturgy." With this statement, Louv explores further the idea of America II using the technology of the future to recreate a (relatively unreal) past. Baby Boomers starting families in the late 70s and early 80s sought to recreate a suburban environment that did not exist anymore. The Happy Days era they idealized was gone forever. Merging with this nostalgia-fueled urge for safety were the panoply of "lifestyle choices" offered by the "Me Decade" of the 1970s. Countercultural impulses were rehabilitated into the mainstream through connecting media like the personal computer revolution, which was bubbling under the surface in America II's 1983. Louv was prophetic to see this revolution this early having an impact on how people live, work, and shop. The people who would've been suburbanites in the 1950s could now turn to exurbs, self-sufficient communities distant from major metropolitan centers. Is it merely white flight? Well, that is certainly a significant component of this exodus away from the cities and out to the wide open spaces of the Sun Belt. But Louv goes a step further, asking not only what will these new "urban villages" look like, but what will happen to the old cities? While his predictions handwaved the prominence of gentrification in the next two decades, he did foresee the long death of industrial city centers.

3. Louv sees the tendency for the privileged to bunker down into an increasingly privatized landscape: gated communities with private security forces, major metropolitan areas (like Houston) which dispensed with most public services and relied on a single economic sector to propel its growth, sprawling metroplexes dominated by the automobile and air conditioning, two technologies that allowed for settlement of the Sun Belt. Decentralizing technologies allowed for human communities to not only sprawl, but disconnect from any social commons. The neighborhood associations which have become the butt of jokes about fascist lawn standards (memorably parodied a decade or so later in a classic X-Files episode) are seen here as ways for the anxious settlers of, in Louv's words, "capitalist communes" to "control thy neighbor." The urban counterpart of the neighborhood association, the condominium, also places sometimes-onerous restrictions on the inhabitants. The dream of the single-family suburban home, Louv tells us repeatedly, is dead in 1983. Louv also examines rural re-settlers of the "L.L. Bean" variety; wealthy liberal city dwellers seeking to rediscover their WASP ancestry in the small woodland towns of New England.

4. The chapter titled "The Company as Cult" looks at the all-in-one corporate campuses of Silicon Valley, which in the early '80s were pioneering some of the work practices that we would find common today in the Facebooks and Googles of the world (on-the-job lifestyle perks, flex hours) combined with the zaibatsu practices that were in vogue as the tech sector was finding itself in conflict and eventually concord with Japanese ways of doing business. Nowhere in either corporate "cult," Louv notes, is there a place for unions to protect workers' interests. On the flipside of this new corporate overlordship, individualistic (and libertarian) entrepreneurs are working from home, taking advantage of the proto-virtual technologies we take for granted today. But again, the ability to uproot and work for oneself needs a hefty helping of savings and investment more often than not borne of privilege and previously-established financial advantage.

5. Overall, it's startling how many trends Louv was able to see percolating in the American landscape of living and working in 1983; so many of his observations are essentially issues of inequality, corporate control, and substandard living environments that we can see have reached critical mass more than three decades later. Issues of infrastructure for dispersed populations are already evident in the America II of 1983; one could argue not a single politician (with the exception of the first two years of Obama's first term, and that was termed more a stimulus than a comprehensive infrastructure plan) since Reagan has comprehensively addressed these worries. Louv asserts that the mobility, both geographic and occupational, of Americans in this new era will require support from the federal government to help people retrain and relocate if necessary. Such warnings weren't heeded, and America I definitely did get left behind, while America II grew, cancer-like, across the landscape.
Posted by Michael Grasso at 9:00 AM