I haven't talked about my ancestry very much in these pages so far, but I'm half-Italian, half-Irish, a pretty common combination where I come from and a pair of ethnicities rich in both real and perceived myth and folklore. The Irish side, well, I wouldn't know where to begin there. But the Italian side, that's a little different. On the Irish side, I feel like people tend to consciously mythologize the occult, the supernatural, and the otherworldly, to narrativize and preserve it. But on the Italian side, all that folklore beats under the surface, unseen and unspoken of. It's just self-evident. You do things, you have rituals, and they just are. Remember when Fredo says a Hail Mary in Godfather II while he's fishing to get the fish to bite? It's that kind of thing. It's real folk belief and it's relatively unchanged since my ancestors came over to America 100 years ago.

The last few weeks, since my own podcast launched on iTunes, I've been attentively following the New & Noteworthy page of the TV and Film section of the iTunes store, for, well, obvious reasons. One of my favorite new podcasts I've found this way is "The Goodfellas Minute." I mean, that movie for me is one of the immortals, and this podcast, hosted by guys who grew up in and around the neighborhoods depicted in the movie, has been a real treat. They provide a lot of the cultural and historic and even geographical detail behind what's happening in the movie, along with a healthy respect for sausages and peppers, gangster shirt collars, and the lore of the Mafia (which does not exist, of course).

In today's episode, the guys mention how Paulie (Paul Sorvino) is wearing a gold chain with a cornicello pendant in the scene with the sit-down with Henry and restaurateur Sonny Bunz. So yeah, the cornicello and the evil eye. Let's talk about those. 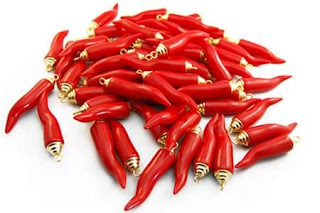 First of all, while I grew up half-Italian and half-Irish, the neighborhood I grew up in was overwhelmingly Italian. I also spent a lot of my childhood traveling back to East Boston to my Italian grandparents' three-decker for Saturday gravy and cutlets. (And please. Let's not start a sauce vs. gravy argument here, okay? Henry Hill says gravy and sauce interchangeably when he's making meatballs while coked out of his mind, and that's good enough for me.)

Anyway, to get back to the cornicello, everywhere, and I mean everywhere, was the cornicello in East Boston and in Revere. I actually didn't see it a lot on neck chains but in houses, on keychains, and especially on rear view mirrors? Yes. I think dashboard saints had lost their vogue in the 70s and 80s and the cornicello, with its totemistic, male power* was the perfect car accessory, way more badass than fuzzy dice.

So why do you wear the cornicello? You wear it as an apotropaic ward against the evil eye. 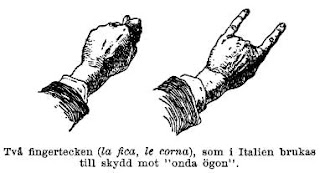 Now, while I might not have understood the occult underpinnings of those weird little coral horns as a kid, I knew about the evil eye. Let's backtrack again, this time back to my own neighborhood. Our next-door neighbor was an Italian widow. And while she was apparently immensely wealthy, she spent most of her time in a shawl and hood, walking around the neighborhood, collecting cans and bottles. So of course the kids (and I have to be honest, even some of the adults) in the neighborhood characterized her as a witch.

There's a power in widowhood in Italian culture, right? Again, think back to the flashback portion of Godfather II, to Sicily, where Vito's mother, left widowed and childless (except for poor dumb Vito) by vendettas, attempts to take revenge on Don Ciccio? Yeah, badass. She's got nothing left to lose. And so the folk belief around the neighborhood was that you did not want to mess with our neighbor while she was walking her grocery cart around the neighborhood, because she knew how to put the evil eye on you.

Did I really believe it? Well, I don't know if I ever did because I was too young to fully understand this story while I was young, and too old to believe such nonsense by the time I was a teenager. I was in high school when she died, hit by a car while walking her cart near one of the most dangerous rotaries in my hometown, so the neighborhood legend went, and her presence still hangs over the house next door to this day. But to pick the evil eye out of all the things that this powerful, widowed woman could do to you... it's meaningful.

* The flip side of "wearing the horns" in Italian tradition, of course, is being cuckolded, and not only can the hand signal for giving the horns be a ward against evil eye but it can also signify you know the person you're pointing at has been cuckolded. So, you know, basically watch where you point that thing.
Posted by Michael Grasso at 9:07 AM