The Material Culture of 1970s Paranormal Researchers: "Into the Unknown," Reader's Digest, Part 1

I may not have spoken in these pages before about how much I love that 1970s moment where science and pseudoscience start inexorably creeping towards each other, and the visual and material culture that results from it. I have mentioned in these pages how much the DHARMA Initiative from the TV series Lost just nails that exact period and trend, and to be honest, the creators and writers of Lost must have had that same obsession as kids of the '70s.

For a short period, as the Age of Aquarius rose over America, serious researchers, sometimes even with connections to the defense industry, were looking in a sober way at elements of the paranormal which could be tested in laboratories: ESP, clairvoyance, biofeedback, all ways in which the human body could do things beyond the expectations of accepted science. Behind the Iron Curtain, this trend was replicated with the field of "psychotronics."

And here's the thing about that kind of research: a great deal of it could not be accomplished using existing experimental equipment! Oh sure, paranormal researchers in the '70s repurposed polygraphs and EEGs and all kinds of other devices meant to measure the human body's unseen reactions to the environment. But for this kind of... special research, bespoke measuring and testing equipment was sometimes needed!

And that's what this ongoing feature of Renfusa is going to be all about; these ephemeral pieces of paranormal research equipment. I'm going to present the images without too much comment so you can ooh and aah over them with me; they really do hit my sweet spot aesthetically and weirdness-wise. To be honest, I don't have a lot of knowledge on how these pieces of equipment were used other than the brief captions in the books I'll be using and the cursory verbal mentions in the pieces of filmed media I'll be screenshotting. I'd guess most of these custom machines are gone forever, lost down the plughole that so many of these researchers swirled down as we entered the rational 1980s.

This first set of photos is thanks to our esteemed Euergetas, who loaned me her childhood copy of Reader's Digest's Into the Unknown, a 1981 compilation of all kinds of New Age, paranormal, and Weird subjects. The rest of the book is really fantastic; a full-color walk through 5,000 years of pseudohistory, magic, and the unknown, but I wanted to concentrate on these labs where people were trying to quantify the unknown using machines that present the best and weirdest trends in 1970s design. 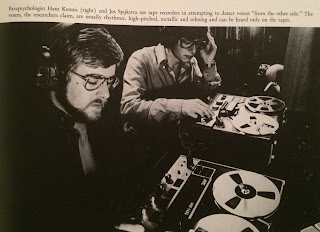 Electronic voice phenomena! It always feels like EVP can only be properly caught on big honking reel-to-reels like these. Hans Kennis has a website here (in Dutch) where you can see he still works with magnetic tape! 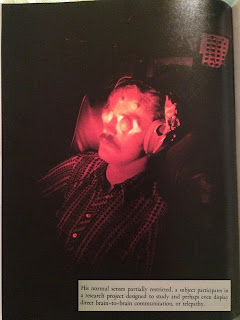 You'll see what kind of telepathic signal they were trying to send to this mustachioed gent further down the page. But for now, check out those ping-pong ball goggles, headphones, and electrodes! 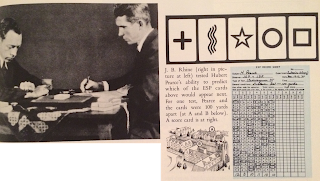 The Zener cards are probably the single most famous piece of ESP research equipment. They're so well-known that even Dr. Peter Venkman uses them at the beginning of Ghostbusters (speaking of which, the Ghostbusters' university lab will probably end up being an entry in this series). Dr. J.B. Rhine, the man who invented them at Duke University's Parapsychology Laboratory with the help of the eponymous Karl Zener, pioneered scientific paranormal research at Duke. 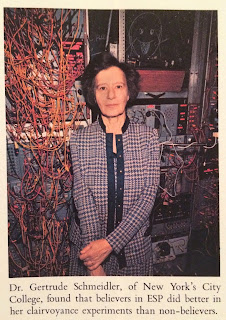 Speaking of paranormal researchers in New York City colleges... Gertrude Schmeidler stands in front of a wall of wires of unknown purpose. 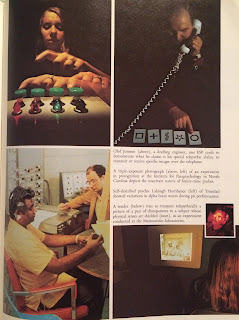 Oh, so much happening here. Olof Jonsson on the phone doing the Zener card test, an experiment at presumably the Rhine Research Center in Durham, North Carolina with a custom reaction machine, an EEG machine measuring alpha waves, and the Lancelot Link: Secret Chimp image our ping-pong-ball-eyed subject was trying to view, at the Maimonides Medical Center in Brooklyn, home to many psychic experiments in the 1970s. 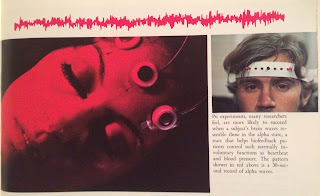 Biofeedback was another of the psychic phenomena that researchers looked into in the 1970s; as stated above, the alpha wave was believed to be the key to a host of abilities.

This "witches' cradle," more properly termed the ASCID (Altered States of Consciousness Induction Device) was developed by Robert Masters and Jean Houston in 1973 to induce trance states. A few years earlier, they'd written The Varieties of Psychedelic Experience, one of the first encyclopedic looks at the effects of hallucinogens and psychedelic drugs.

This just reminds me of the "jump to conclusions" mat from Office Space. Robert Morris went on to lecture in parapsychology at the University of Edinburgh. 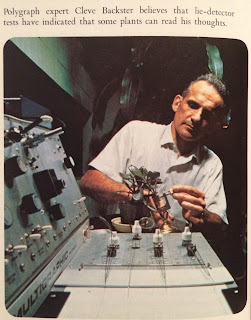 Cleve Backster is an interesting chap. He helped popularize the polygraph within the CIA until he decided to investigate how the polygraph might be used to sense the thoughts of plants. He would picture violently harming the plant and record what he perceived as an immediate response through the polygraph.

Posted by Michael Grasso at 9:00 AM