The Material Culture of 1970s Paranormal Researchers: "Into the Unknown," Reader's Digest, Part 2

Last week we looked at some great images from Reader's Digest's Into the Unknown from 1981. Here's the back half of that collection, similarly annotated. 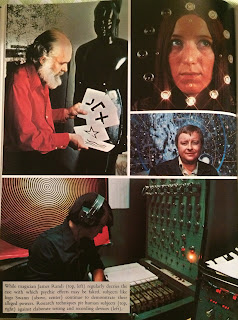 Again, a lot going on in this set of photos. Legendary stage magician/professional and skeptic/debunker James Randi was everywhere in the 1970s, taking on famous psychics like Uri Geller and perpetrating hoaxes on those he considered too credulous. (Definitely advise you check out the recent documentary An Honest Liar.) Putting him in this book, which seems to fall more on the "believer" side seems a bit counterintuitive, but hey, whatever. Ingo Swann was one of the researchers at SRI who pioneered remote viewing research with Project Stargate. That photo of the young woman in the top right features a reaction clock made of 12 lights; I believe it appears on an episode of In Search Of... I plan on looking at in this feature. And at the bottom, not sure what this "testing/recording device" is, but it looks EEG/polygraph-ish. 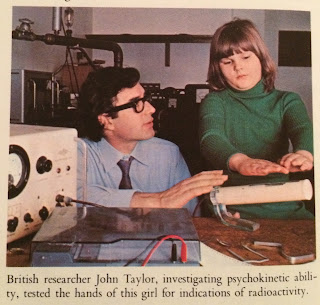 John Taylor was a physicist influenced by Uri Geller to look for evidence of psychokinesis. In his research at University of London, he believed that some of the children subjects of his experiments could alter objects sealed inside glass tubes (another form of "spoonbending"). James Randi found the tubes were easily tampered with and by the end of the decade Taylor believed there were no grounds for believing in the supernatural. 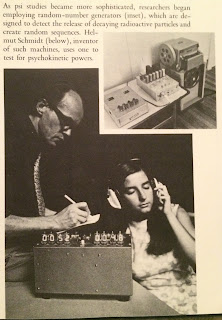 I love the design of that random number generator! Not sure if those are technically Nixie tubes, but they're close enough. Helmut Schmidt was a physicist-turned paranormal researcher at the Rhine Institute who tried to determine if psychics could influence random events like radioactive decay. This all grew out of earlier experiments under Rhine himself where dice were rolled and psychics attempted to use TK to affect the results. 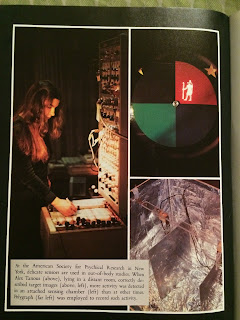 Alex Tanous is pictured on the opposite page, not provided here. Here's the main thing I want to know about that "target image"; why is the American Society for Psychical Research using Anubis as a psychic out-of-body projection target image?? Is this some Swan Station countdown clock hieroglyphics stuff here? 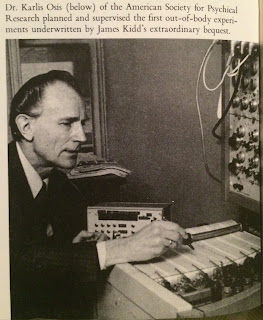 Karlis Osis was also at ASPR in the 1970s as director of research, and he worked on out-of-body and near-death experiences. 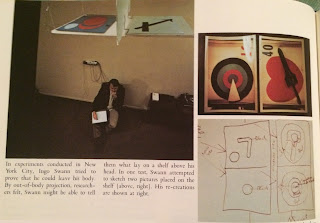 Here is Ingo Swann's remote viewing/out-of-body projection being tested at ASPR with a couple of pop-art-looking paintings hidden on a high shelf. 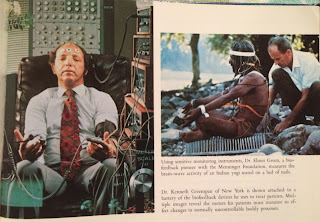 Elmer Green was another pioneer in biofeedback, the belief that the human body could control many of its involuntary and autonomic functions. Biofeedback as practiced in these laboratories in the 1970s required precise measurement of all kinds of autonomic functions, like nerve response and heartbeat. Kenneth Greenspan was a psychiatrist who used biofeedback techniques in treating anxiety and stress; he became the head of Columbia Presbyterian's Center for Stress-Related Disorders in the early 1980s.
Posted by Michael Grasso at 12:00 PM No comments: