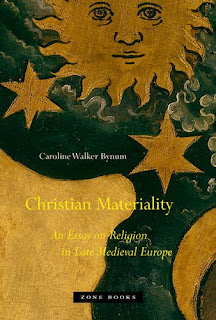 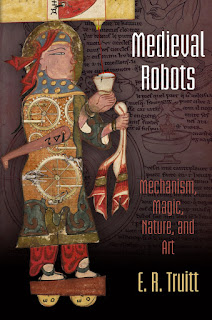 Let me preface my look at these two books for Week 3 of Entangled Objects with a small proviso: from 1993 to 1997, I studied medieval History and Literature as an undergraduate. My focus was mostly on vernacular literature in Middle English, Old French, and Tuscan Italian and my senior undergrad thesis was on the historical person and the literary stock character of the student clerk in both historical accounts and in vernacular literature of the 13th and 14th centuries.

While it has been a long time since I've delved full-on into medieval Europe, I've definitely kept my oar in, so to speak, on medieval studies. The field is going in exciting new directions in the past two decades, but I'd not yet encountered either of the books on this week's syllabus. Also please note: I spent much more time dissecting Christian Materiality than Medieval Robots.

I reacted to the thesis of Caroline Bynum's Christian Materiality: As Essay on Religion in Late Medieval Europe as conveyed in its introduction with a good deal of skepticism. While I was intrigued and excited by her initial statements about ideas of generation and corruption being central to the medieval experience (Bynum 30), I was a little more curious about how she would explain her idea that the materiality of late medieval cult objects as objects was central to their meaning and importance as objects of devotion (Bynum 28).

Through the next four chapters of argument, Bynum wanders far and wide through much of medieval and early Renaissance theory and praxis on relics, sacramentals, and other holy objects in Christendom. And her logical steps in explaining her theses are ultimately very satisfying, even if in the middle of the journey I was not always certain about where I was being led.

As an undergrad, I always had problems understanding the non-representationism of medieval art. I think in high school I was programmed to find Renaissance art's use of perspective, realism, and aesthetics to be superior to medieval art. Bynum assuages this long-standing discomfort in her first chapter by conveying that different values were placed on the specific aspects of medieval devotional art and what it chose to represent. For both the medieval parishioner and the medieval theologian, the symbols of martyrdom – "the Wheel," "the Eyes," "the Arrows" – became a symbolic shorthand for the saint's identity (Bynum 61), so these would often be given visual importance in pieces of art. The materials from which the icon, statue, reliquary, or image was made were also essential to understanding the powers and identity of the figure depicted (Bynum 59). The moving parts of works of art, especially those meant to move, transform, open, or close in reliquaries or effigies, also provide the worshipper with a new experience depending on time of week or liturgical year. And the tangibility of relics was essential to their purpose (Bynum 65); the devout were meant to touch, kiss, and taste the surfaces and products of the miraculous relic.

In chapter two, the power of relics to change and heal and inspire and primarily to transform is discussed. Bynum's discussion of visions of real flesh and blood in the Eucharistic bread and wine (Dauerwunder) is fascinating and one I was not familiar with. In ancient and medieval Eucharistic theology and Christology, leading right up to the Fourth Lateran Council, there is this feeling of... an indicator needle that needs to be precisely balanced between purely symbolic transformation in the Eucharist and a full physical one. Much like the duality of Christ himself, the duality of the Eucharist is a dangerous balance to strike. One false move and you are a heretic. But just because these paradoxes are abstruse to the modern reader does not mean that they were as difficult to understand for the medieval worshipper. And these changes, these unreal bleedings and be-fleshings and the other excretions of statues of miraculous oil and milk, these denials of the usual earthly cycle of generation, these tangible miracles are the things that fill the medieval observer with a powerful inspiration and faith. Understandably, these expressions of folk faith sometimes made theologians and clergy anxious, as they moved that needle I mentioned above solidly into materiality.

It is in chapter three that we find ourselves face to face with the flipside of spontaneous miraculous generation: the anxiety over the nature decay or unnatural preservation of body parts in relics. Incorruptibility isn't a necessity for a relic, but it can and does provide power in its denial of the ordinary cycles of generation and corruption. For those relics that are the product of decay, the glory of gems, gilding, and fine art or the symbology of unchanging gems or flourishing flowers on a permanent, decayed body part (bones or ashes) is meant to lend the aura of immortality and of the Kingdom of Heaven to the relic (Bynum 71, 181-182). The anxiety over relic as piece of the whole is assuaged with the promise of eventual miraculous bodily Resurrection as well as the idea of Eucharistic concomitance (Bynum 208 et subseq.); Christ's body and blood can be in multiple places with the same holy power during many celebrations of Eucharist, and the power of Christ dwells simultaneously in both bread and wine.

Bynum rounds out the book with a fourth chapter which brings back medieval anxiety about matter, generation, and decay by examining the medieval philosophical and "scientific" view of earthly matter. I was amused at Bynum's citation of St. Isidore's linguistic games around the concepts of corpus/corruptus, materia/mater, and caro/creando (Bynum 231-232), knowing that many of these same late antique/early medieval linguistic games, some by Isidore himself, grounded much of medieval theology. A universe where there was no sense to the changes that happened in matter was unpredictable, and in the medieval scholastic Aristotelian schema, undesirably disorderly. So natural processes of decay as well as influence (such as astrology) were encoded into both learned and popular views of matter. This lends enormous conceptual power to the changes that occur to relics and to objects of devotion! Relics could heal, cause unnatural visions, change themselves from decayed things to things full of vitality and freshness. This conveys intimately and materially the power of God and the saints.

Thinking of my own reaction to the text, I feel like the most convincing aspect of Bynum's book is this idea of anxiety and fear around normal cycles of generation and corruption. It cannot be overstated how connected all medieval persons were to these cycles, at least as compared to us in the 21st century. One's continued survival depended on the natural cycles of agriculture – unsurprisingly, there are many stories about people stealing hosts and using relics to ensure good harvests and to protect their food from decay (Bynum 169-170) – and almost all disease had no systematic scientific cure. Nature and its processes must have seemed immensely inscrutable and profoundly frightening to the medieval person, whether peasant, priest, or noble. In other words: medieval people loved their technologies and objects for the same reasons we love ours: because they promise health and, ultimately, immortality.

Medieval Robots was also a very good look at a previously-underserved area of research: automata in the Christian Middle Ages. The automaton begins, to the Western Latin Christian, as an exotic technology, reserved for the Eastern Mediterranean (those ancient lands like Egypt and Greece and their successors in Byzantium), the Muslim world and the Mongol world. It is in this role that automata appear in early romances. Truitt then looks at the fact that the automaton is a relic of the ancient world, and that the human making of a counterfeit of life is (imperfect, fallen and corrupted) analogue to the person of "Natura artifex" making life on her forge. The linguistic background of the idea of what we would today call "technology" as "magic" in classical Latin is investigated here. This basis allows Truitt to explore what medieval "magicians" were seen to do; the scholastic/scientific holy men who created oracular heads to tell the future find their root in a medieval conception of Virgil as the first among oracular head-makers. The chapter on automata as devotional objects looks at their way of counterfeiting life as a memorial; this chapter made me think of the place of the zombie/undead on the modern uncanny valley chart. Like the physically-transforming relics and religious puppets/automata that Bynum describes, memorial automata's unnaturality added potency to their impact. Truitt's final chapters on late medieval lords finally owning their own automata and the coming popularity of clocks, puts us on the way to the Renaissance prince's desire to own and display clockwork wonders and the making of clockworks part of the common late medieval person's life and universe. What was once exotic is now within reach, not only of the noble but also the commoner.

To tie both these books back together to an earlier post on this blog, I do like how so very little has changed in the idea of material objects as objects of devotion/granters of boons from the mechanical oracles of Roman Egypt to medieval Europe a millennium later.

Edit: Oh, I now realize I have another old post that is at least somewhat related to Bynum: at the outset of chapter four, she speaks of prodigies and omens (Bynum 219, footnote on 369), and so I thought it would make sense for me to link to my post on ancient Roman Fortean events as religious prodigies.
Posted by Michael Grasso at 9:00 AM