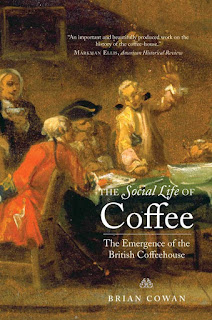 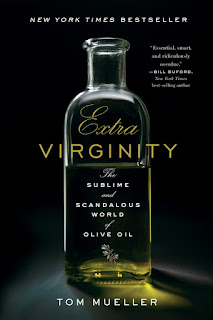 Like most folks who read and enjoyed Neal Stephenson's Baroque Cycle in the early '00s, I was influenced by his vivid portrayal of the coffee houses of Restoration, Jacobite, and Glorious Revolution London. Posited as loci where the new rising class of natural philosophy divines, professional civil servants, old-style Renaissance-man nobles, and "rude mechanickals" could mix and interact, Stephenson's fictional and real-life figures mix and discuss and, in the coffee-houses, lay the groundwork for much of modern-day information-age capitalism (including banking, international commodity trading, and cryptography), unsurprising considering the Cycle is a prequel to his Cryptonomicon, whose "modern" setting takes place during the first Internet bubble and the fight for "strong crypto."

The Baroque Cycle was completed a few years before Brian Cowan's The Social Life of Coffee: The Emergence of the British Coffeehouse, but you can feel those same Internet revolution impulses informing his work. While much of the first part of Cowan's book is dedicated to the very intriguing story of how coffee became popular in London (and how its benefits were extolled by a group of "early adopters," neophiles that Cowan calls "virtuosi," those same Renaissance men in search of foreign exotic novelty), it is in Cowan's examination of coffee-house as space that the book really shines.

The coffee-house couldn't exist without the crucial sideline of the dissemination of news. The coffee-house and the newspaper grew up side-by-side in London, and that unique mix of coffee-house patrons allowed men (and it is pretty much almost always men, although women sometimes owned coffee-houses and hawked newspapers there) of different social strata, occupations, and political alignments to exchange information. Like the modern Internet, governmental authorities sought to regulate this place of exchange of information and in some cases even close them down. But the sheer number of coffee-houses and their patrons' desire for a place to socialize and to become more informed was much stronger. This tension between king and courtier was seen throughout the reigns of Charles II and James II (for obviously very different political reasons).

If I am focusing more on the back half of Cowan's book it is only because that social and informational role looms large by the time you finish the book. I am a great believer, as my co-host and I posited in a very short digression on my podcast (at around 26:00), in the theory that modern capitalism was fueled by the very different physiochemical experience of caffeine in stimulating thought and trade, as opposed to Europe's long use of the depressant alcohol as their main beverage. Cowan gives that theory some faint appraisal here, but mostly asserts that coffee, tea, and chocolate's psychosocial position as a novelty to the European led to the coffee-house being frequented by people interested in new things and ideas. Coffee, tea, and chocolate also contained more opportunity for their partisans to associate the drinking experience with luxury goods, apparatus to accentuate the aesthetic experience of consuming (especially for tea later in the 18th century: china, silver, etc.). There were few houses in London where bhang, betel nut, or opium were openly consumed, and these were also commodities that filled the British "virtuoso" with the interest in the new (Cowan's chapter on the rampant experimentation involved in "early modern drug culture" was probably the biggest revelation for me personally; as I've said, British coffee-house culture has long interested me but I had no idea that the impulse to tinker with one's internal "alchemy," as it were, with new commodities from outside Europe was so strong so early in the West and especially Britain, although Cowan does not ignore the "nativist," Paracelsian impulse to keep using the native plants of Europe as medical treatments and not resort to the foreign.)

And it's made clear that while the novelty of coffee was made domestic and was accepted by the intelligentsia and idle nobility of London, it was never quite made British in the time period Cowan discusses. Just Cowan's survey of how many coffee-houses used the iconography of Turkey and the Ottoman Empire to represent coffee tells you that. In fact, the whole enterprise of entering a coffee-house in Restoration Britain smacks of safe rebellion, of a taste of the dangerous, of liminality. My undergrad thesis was on the medieval student clerk in both history and contemporary literature. Like the British "virtuoso," the student clerk was another son of privilege inclined to enjoy and embrace new ideas and to exist outside the narrowly-codified life prescribed for sons of nobility. They acted rowdy, they got together in groups to paint the town red, they experimented with new types of writing (Goliardic poetry), and they existed in a liminal space, neither adult nor child, neither holy nor secular. The typical coffee-house patron in 17th century London also existed at the edges of the traditionally-codified space of a "gentleman." Surely, the reality of the Restoration has something to do with that, as well as the larger economic and mercantile changes happening in Western Europe in the second half of the 1600s.

In Tom Mueller's Extra Virginity: The Sublime and Scandalous World of Olive Oil, we are essentially given a non-Mediterranean's culinary, social, and economic tour of the history and present of olive oil production. The author's love of the stuff, as well as the producers', is apparent throughout this book; even the arguable adulterators and mass producers of "extra virgin" olive oil have wistful nostalgia over growing up on small farms where the oil was ground by ancient millstones. Mueller's travelogue, while vivid, reiterates the same set of points: that mass production means an inevitable adulteration and weakening in the very qualities that make olive oil desirable, health-wise and aesthetically.
Posted by Michael Grasso at 10:00 AM